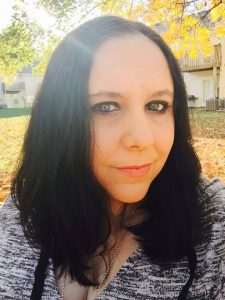 ***Update***Cesar has since been terminated from his job, though will most likely seek similar work soon***

Carrie, is not just complacent with Cesar’s fascist ideology, they actively participate in it. From attending pre-August 12th Charlottesville rallies held by white supremacists to chatting it up with his douchestaffel, goose stepping friends online.  If you ever happen to get your tarot read by Carrie, be aware that if whatever you tell them will be reposted on her personal facebook mocking your problems.

Today we present Asheville resident and TWP scumbucket – Cesar Armando Arvelo Santos. Cesar has actively been in National Socialist and white supremacist circles for many years, including working in conjunction with various KKK chapters, all Nationalist Front (NF) affiliated organizations, and the now defunct Traditionalist Workers Party. He’s been living in Asheville for the past few years, though he’s flown largely under the radar and evaded being pin-pointed by using various aliases and working behind the scenes. Most recently Santos coordinated logistics for the TWP for the Unite the Right rally in Charlottesville, VA last August. Before TWP had their hilarious implosion a few months ago, Cesar was the Region 2 Commander, overseeing memberships across several states across the southeast.

Cesar played a major role in coordinating and commanding the August 12th rally last year that though ending up as a resounding loss for the fascists and racists, also claimed the life of anti-racist protester Heather Heyer. According to Matt Parrott’s own account of the August 12th rally, “Cesar Hess, a Regional Coordinator of ours who’s an experienced combat veteran, worked with the League, NSM, and other Nationalist Front groups to help create two shield walls”. Cesar can be seen in a number of photos and videos pointing and directing these shield walls, one being the same recently doxed WNC shitbird Christopher Pack was a part of. Cesar was also originally named in the Charlottesville lawsuit filed after the Unite the Right rally under the pseudonym “Cesar Hess”.

He moved from Colorado Springs to North Carolina, and has since lived in West Asheville until relocating to South Asheville with his partner Carrie Lynn Pierce, and his two kids from a former relationship. To our delight he has been terminated from his latest position as an electrician installing and servicing audio, visual and other electric systems in buildings in the surrounding AVL area. Through this work, Cesar gets to infiltrate within the local working class community via construction sites and specifically targets the Latinx community here in WNC.

Cesar is a big fan of podcasts, and was excited to be a guest speaker on The Right Voice Podcast, episode 98 on 3/21/2018, though to save you time, brain cells, extra throw-up feelings, note he doesn’t come on the show until about 32 minutes in. Cesar talks about how he read Mein Kampf in middle school, and describes how at age 12-13 he and his family first moved to NYC from Venezuela. Cesar describes this as his “final red pill” stating it was the first time he was “surrounded by a multitude of negroes” and “never seen so many Jews in my life”. There is a disgusting amount of detailed vile shit espoused by Cesar over the following 2+ hours, including his permission for antifa to dox him using one of his last names. We hope using all four of your legal names is still okay. From celebrating and wanting more killings of black immigrants, to talk of burning synagogues, calling Mexicans rapists, and boasts about tricking immigrant workers into seig heiling. This episode was particularly painful to the ears. The host and Cesar progressively drank alcohol and it was apparent as they continued to lose what little inhibitions or self respect they may have had in the beginning. The discussion throughout the poorly executed podcast episode was as problematic and horrible as one would assume, although, at the end we were able to more critically understand Cesar’s dangerous ideology more accurately.

Cesar is a particularly scummy nazi. He has a complex narrative and manipulates it depending on who is around. For example, he has mentioned pulling the “brown card” and manipulating brown people around him to do things they wouldn’t normally do. With an extremely thick Venezuelan accent and brown skin, not only might it boggle the mind why Cesar would preach white supremacy but the fact that he is allowed in spaces founded on white supremacy can be perplexing- while also not unheard of, as we have seen people of color working with neo-nazis before.

There are many examples of Fascist and National Socialist movements/organizations with some or all membership with black or brown skin. And there is a whole lot to be said for the ways in which the white supremacy has ingrained itself in the  psyches of us all. Though it seems that Cesar has wedged himself into some of these groups as a sort of exception to their specific rules. No matter how confusing, hypocritical or backwards this freaky sack of shit’s narrative appears to be, it is important to remember that racism, at it’s core, is an idea. Ideas can be created, perpetuated and shared by anyone. Therefore, Cesar is no exception.

Let’s not give this rotten slug a smile to hide behind, and reach out to each other to make sure we all know who Cesar really is and what he is really about. This public information has been compiled and delivered to you in order to share and inform with everyone! Do with it what you see fit, stay smart, remain careful, and don’t give this actual asshole a fucking inch. Not in our communities, job sites, or homes. ¡No Pasarán!