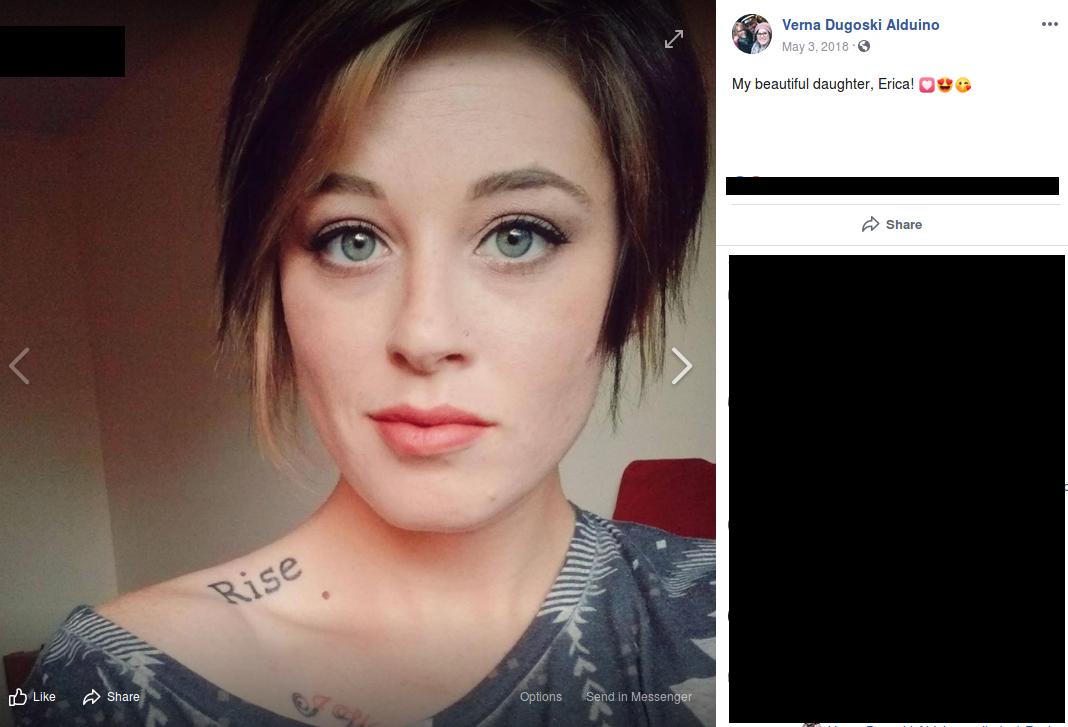 Erica Joy Alduino is a longstanding and active, organizing member of Identity Evropa- a neo-nazi and white supremacist organization born out of a rebranding of the Nationalist Youth Front. Alduino goes by the username ‘Joy’ in the recently released discord server ironically dubbed “Nice Respectable People Group’ (thanks Unicorn Riot!). Previously, Alduino went by the username ‘Erika’ as she heavily organized in the Charlottesville planning server “Charlottesville 2.0” along with in the “Vibrant Diversity” discord server. 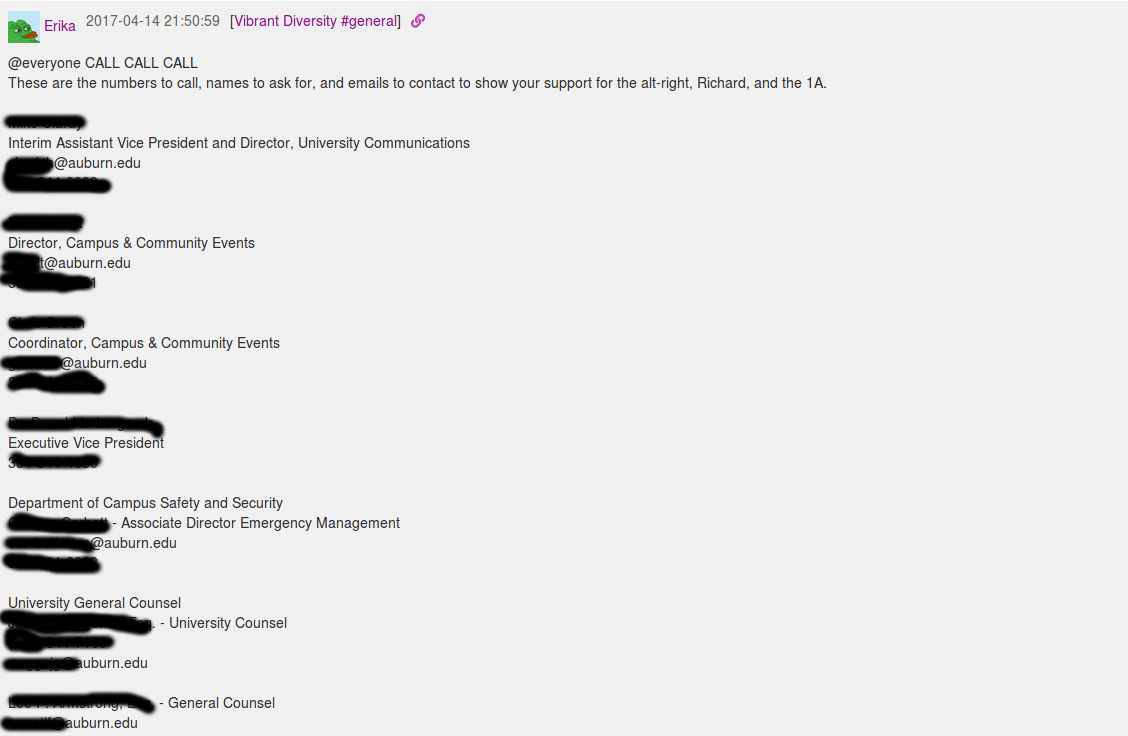 We know that Erica has been a member of the Florida Identity Evropa chapter since at least April 2017, and over the following months organized and participated in various Nazi rallies across the state and beyond. From banner rallies crashing University events, to meet-ups between other self-identifying white nationalists, fascists, and “identetarians”, to coordinated flyering and stickering of their fascist propaganda. Here is Erica is self-identifying as the woman holding the banner in this photo: 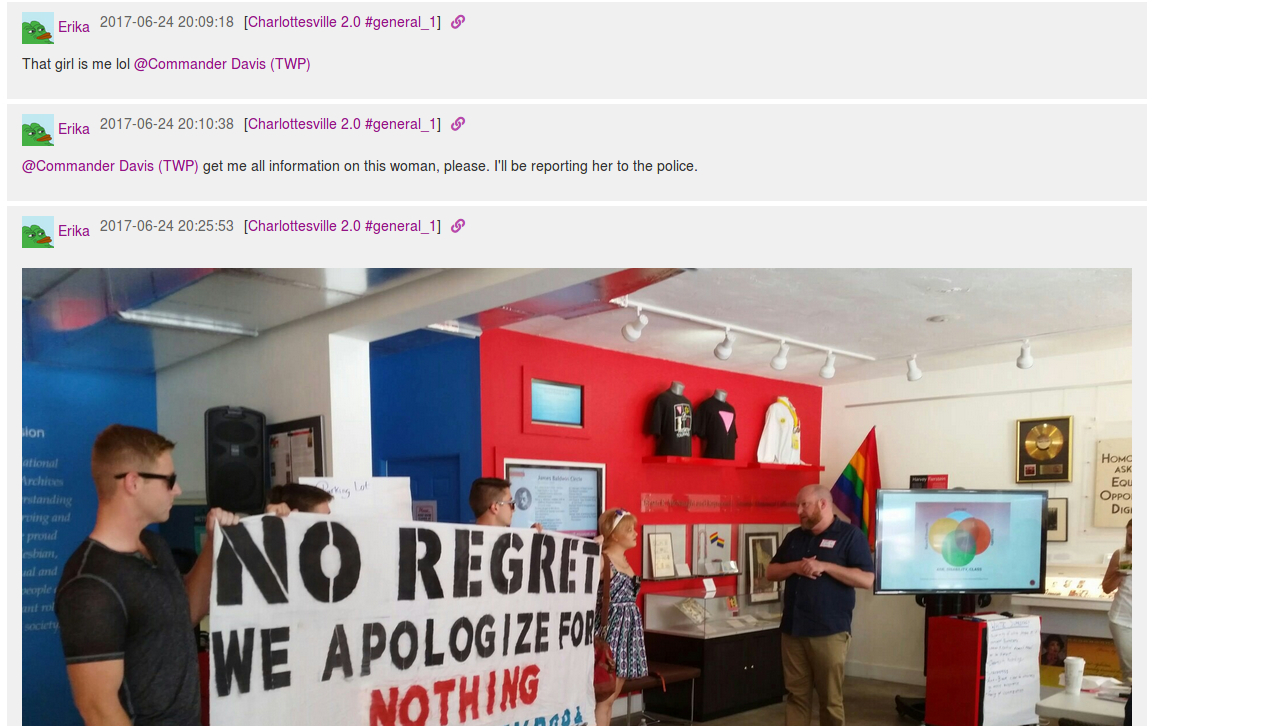 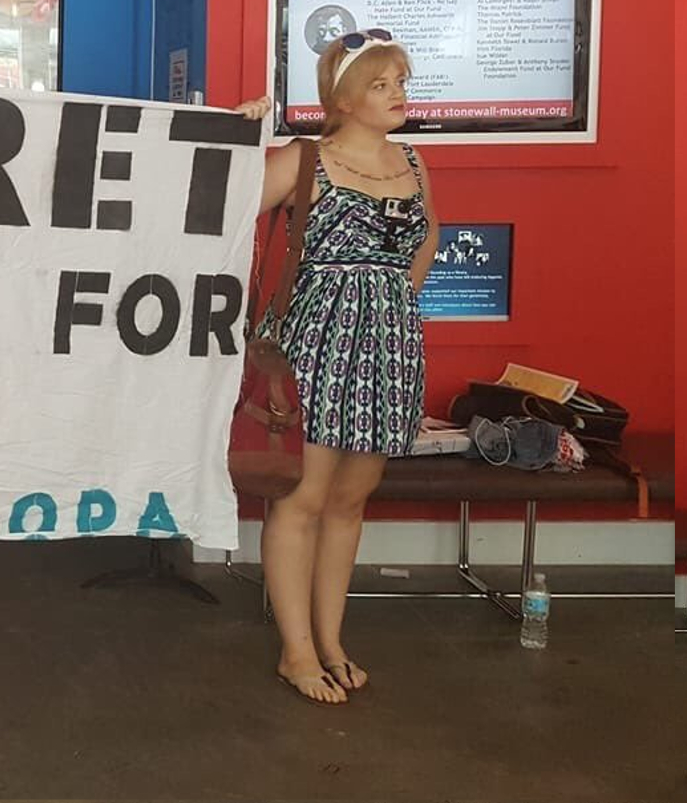 And if we take a page out of Emily Gorneceski’s short Twitter dox of Erica, and citing Megan Squire’s – you can see the matching tattoos across her chest in this photo from a news article she contributed her opinions to: 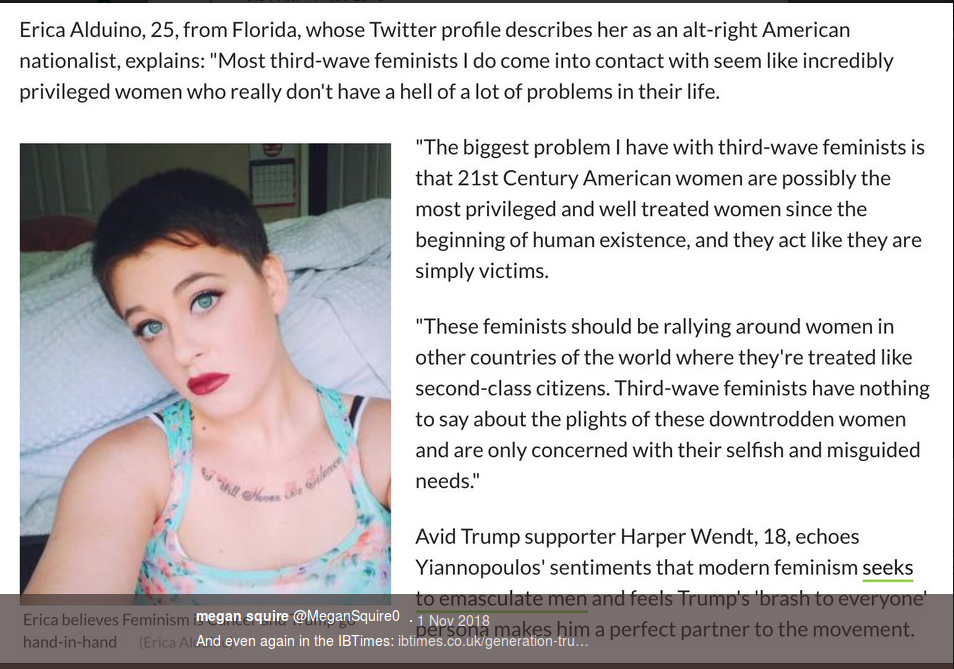 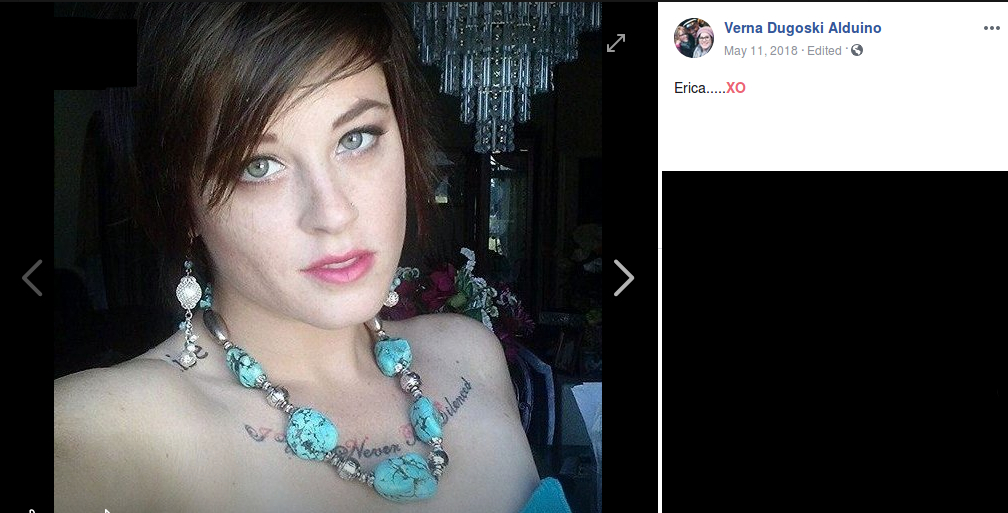 It turns out that Erica Joy Alduino moved out of Florida shortly after the Unite The Right rally of August 2017, and by September of that year was much closer to the Kentucky and Ohio chapters of IE- as evidenced in these posts: 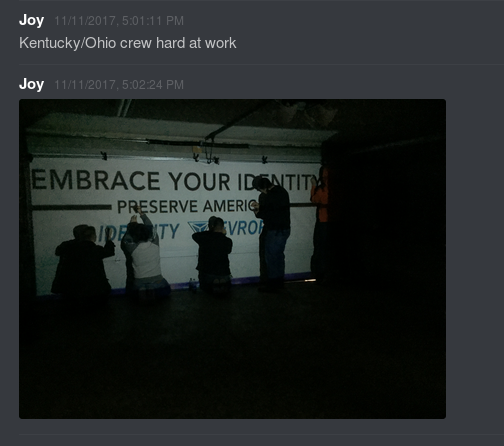 Something to note about Alduino is that she clearly likes to change/mask her outward appearance both for her public Nazi activities and in her free time. Erica has been seen donning wigs and changing both her hair color and style, though naturally she has dark brown hair. If you take looks at the many photographs above she is in, you’ll notice the trend. that why we note the clear tattoos across her chest and right shoulder as being the most clear identifiers if you happen across Alduino. In the Charlottesville server, Erica Joy Alduino speaks openly about their deep involvement in the operation of the server- which acted as a significant organizing platform for hundreds of Nazis and violent white supremacists to attend the deadly Unite The Right rally. Alduino posts hundreds of messages in the server, helping coordinate lodging, rides up from Florida for her fellow Florida Identity Evropa members, along with the usual disgusting racist, homophobic, and antisemitic vitriol. It’s no stretch to say that Erica Joy Alduino’s facilitation of organizing, and coordination for, the Charlottesville rally was substantial. And any substantial organizing for nazis, fascists, and white supremacists – let alone for a rally to build a coalition between these disgusting and dangerous radical positions – is an act that won’t go without repercussions. 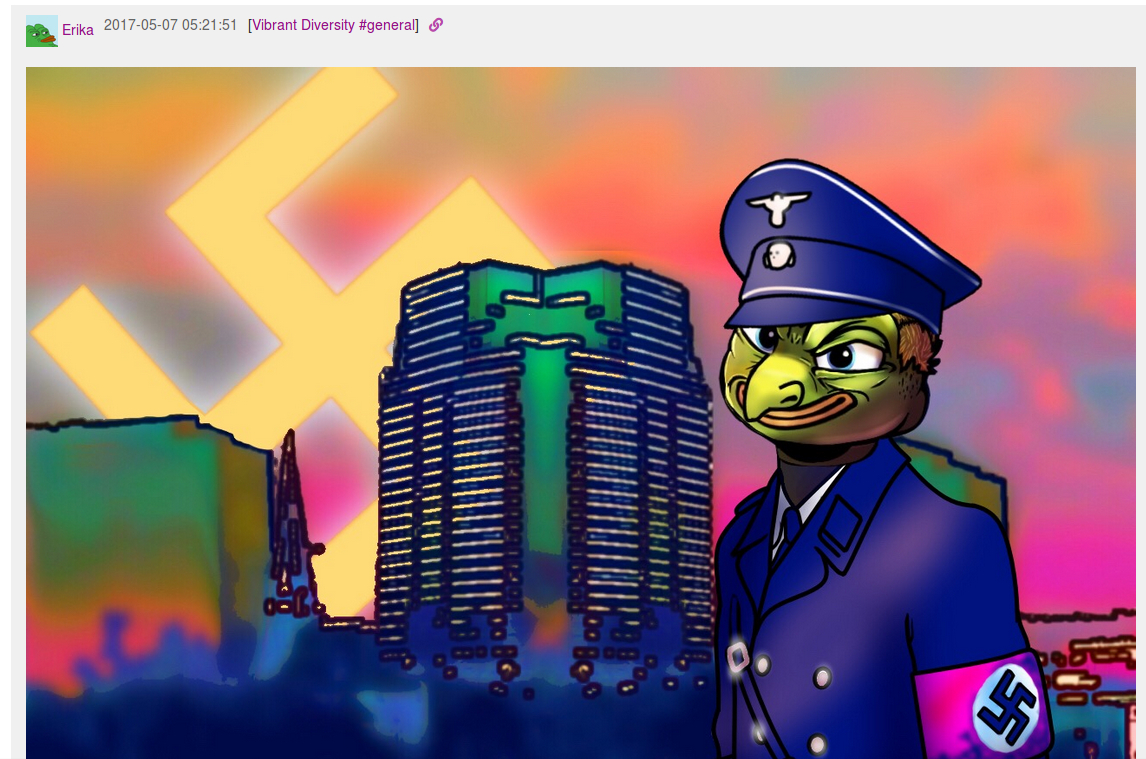 Alduino has participated in a number of “activism” actions with Identity Evropa over the past three years. One particularly disgusting example is Identity Evropa rallying outside of the Pulse nightclub after the deadly homophobic mass shooting that took place there. What this all culminates to is this: Erica joy Alduino is a key organizer and participant with a neo-nazi organization- don’t given her an inch. 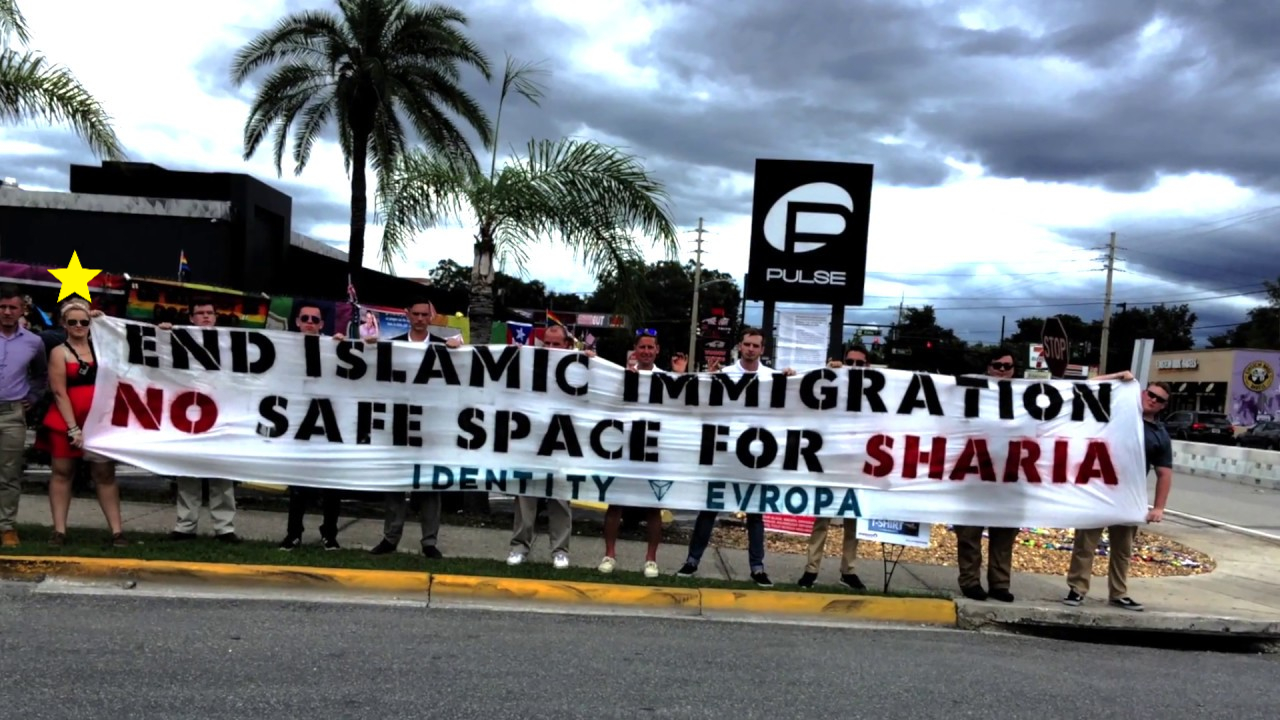