This is a basic appeal and general warning to the North Carolina community regarding Tia Azar Foster and Jacob Robert Martin of Ananda Animal Refuge and Rescue, as well as Mercy Line Transport based out of the Yadkinville area. This document will concentrate on Tia, as Jacob will be getting his own exposure. 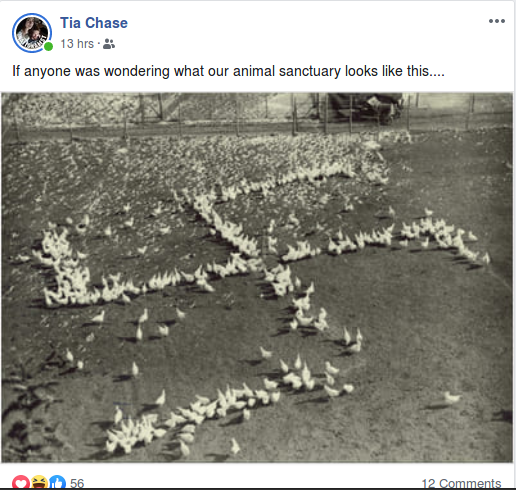 A link to Esoteric Nazism

Tia Foster, also known online as Tia Walsh and Tia Chase, has been hiding some serious skeletons in her closet. Most animal rights activists know Foster by the name Tia Walsh, the lady online that rescues chickens and lives at her bird and fish sanctuary, Ananda Animal Refuge and Rescue.  White Nationalist activists know her online as Tia Chase or Tia Chase II.  All three social media profiles are down as of this writing, but we know without a doubt these three profiles belong to Tia Azar Foster.  The profile “Tia Chase” came under scrutiny when Tia started trying to do jail support for white supremacist murderer James Alex Fields.  When Foster had trouble locating Fields in the prison system, she began spreading unfounded conspiracy theories on social media that Heather Heyer’s death was a false flag operation. Tia took her partner Jacob’s alias’ surname “Chase”.  Under these profiles is where she would spew hatred towards minorities and organize with fellow fascists.  “Tia Walsh” was a bit more palatable with no real political talk except for animal rights, and being the profile that ran the sanctuary’s facebook page.  A dead gofundme link for Ananda shows Tia’s real name, Tia Foster, when input to a Google search engine. 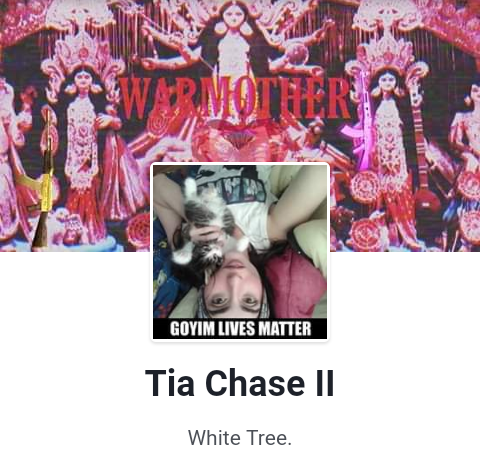 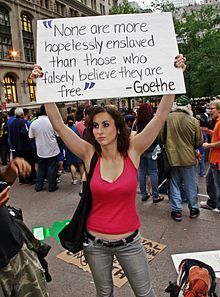 Coming originally from the leftist Occupy movement in NYC in 2011, Foster has been a political scenester for almost a decade. Fast forward to 2019 and she has been reveling in her popularity among the neo-nazis, alt-right and eco-fascist camps. While Tia has kept her love for liberating animals and speaking for their rights, she has also adopted some very abhorrent views of her fellow humans. This includes racism, Islamophobia, transphobia, homophobia and antisemitism – all of which are tied together under Eco-fascism.

Eco-fascism is not a new movement, though there is a current resurgence of white supremacists adopting a contrived environmentalism to their already violently racist and bigoted views. Eco-fascism can best be summed up as a blending of environmental or ecological views of saving the earth, with the means of doing so rooted in a hatred of multiculturalism, or any people seen as “less than”- stemming from the belief that the world is overpopulated and these “undesirables” need to go by any means necessary.  Both the El Paso and Christchurch mass shooters were self described eco-fascists as stated in their manifestos. The basic belief of shutting off borders to migrants and turning the nation into a white ethnostate is at the core of this movement. Violence and intimidation that targets refugees and other marginalized people of color are the tools used to achieve these goals. This is Tia’s new fan club, the neo-nazis that wrap their genocidal views in deep ecology and animal rights activism. Other people who have been near this putrid soul have no clue what she really thinks about her community.

Let’s back up a bit to get some context of who Tia is and how she arrived here. After moving out of her parent’s upper-class home in Ohio, Foster moved to Brooklyn and became a familiar face in leftist circles like Occupy and the animal rights scenes. Attempting to start animal rights groups in NYC, she was criticized for the lack of participation of people of color. This criticism was not received well and Tia began to slip further right rather than actually reflecting on her own lack of intersectionality within her work. Her ego took precedence above progress and concerns of inclusion. 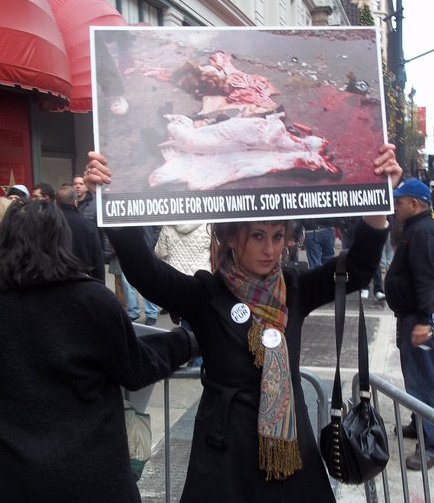 Falling out with the leftist crowd led Tia to look elsewhere to continue her animal rights activism, where she found “Anarcho-Nationalism” and the “New Right” the predecessor of the alt-right. As early as 2012 Foster was being interviewed on white nationalist podcasts, the far right discussing her on 4chan (a popular chat forum amongst white supremacists) and even Matt Parrott essays. In a white nationalist podcast called “Attack the System” hosted by racist Keith Preston, Tia spends an hour talking about her early years transitioning to the far right. Topics include when she was called out for posting holocaust denial propaganda, loathing of politically correct language, rejection of feminism and the JQ (the dog whistle for “the Jewish Question” among neo-nazis). Here she explains her disdain for the left in general and talks about leaving that scene after only a short time.

In the years following, Tia continued to be sort of an anomaly as a far right female personality online and an animal rights activist showing up at protests. Note that most of the activists in the animal rights movement had no knowledge of her antisemitism and only saw her as an animal loving “comrade”. She talks about co-opting leftist terminology and tactics to convert leftist environmentalists to national socialism. Her more underground work might be of some interest to people who work with her in real life. Activities like attempting to do prisoner support for James Alex Fields, the white nationalist murderer who ran down anti-racists indiscriminately in Charlottesville, killing Heather Heyer. Or her and Jacob’s eco-fascist pet project called “White Tree” which has talked about organizing actions to post anti-immigration flyers at “liberal” universities. These targets included North Star LGBTQ Center Incendiary Brewing Company, Forsythe County Safety Center and Emanuel Temple, a synagogue. They also talked about flyering UNC Chapel Hill and Wake Forest. We think it is unfair for people to stand a chance of arrest protecting animals’ rights while unwittingly standing next to a virulent fascist. 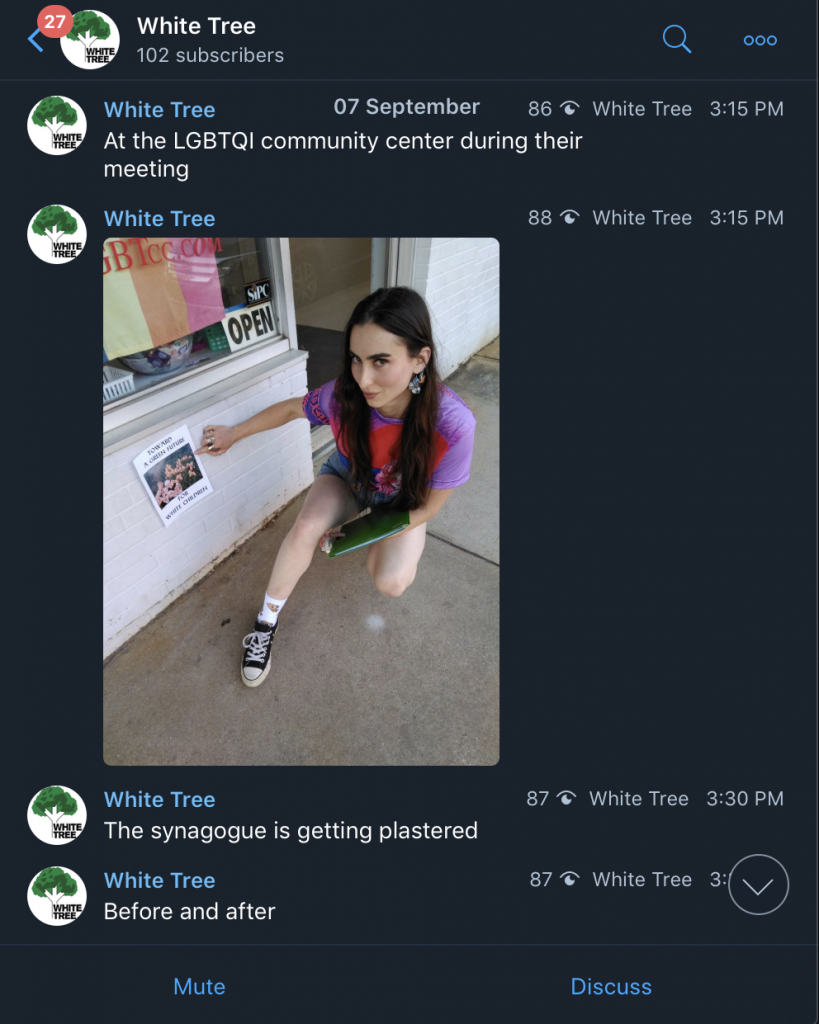 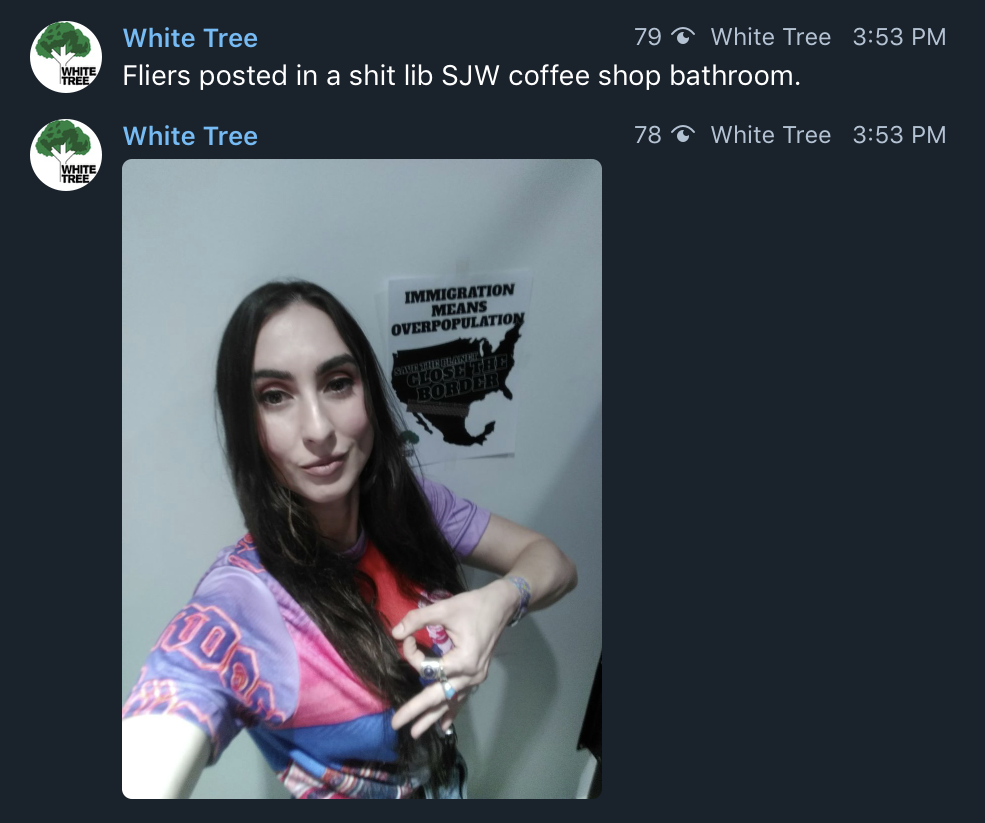 This is as much of a warning to the general community as an appeal for activists of good faith to distance themselves from the disgusting views of white nationalists and the people who try to infiltrate our spaces. If you believe in intersectionality, diversity, anti-racism and fighting oppression of any kind this appeal is for you and we are glad you’ve found it. Fitting a hierarchy on oppression is a slippery slope into a fascist mindset. One where you can spin the narrative that Jews are the very people creating the environmental crisis by having a pro-immigration agenda that destroys the stolen land we now call the United States. We believe in rights for all non-human animals and protection of the natural environment, but not at the expense of violence and marginalization of other human beings. This world is on fire and we need to do something to put that fire out, that certainly doesn’t mean oppressing and blaming people who are turned then into scapegoats for the masses. Clearly this is counter to the animal rights mantra of being the voice of those who don’t have one. Does the child locked in a U.S. concentration camp have a voice? Or the millions of wrongly incarcerated black and brown people have an effective way to communicate what it feels like to be forgotten? 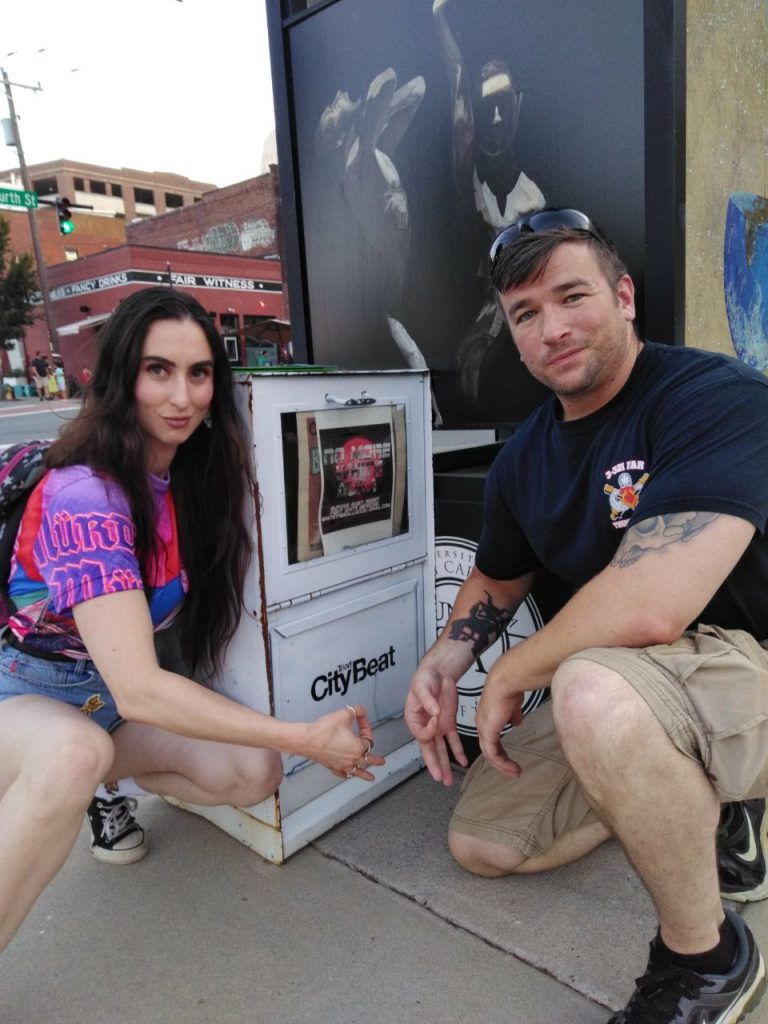 Tia and her partner, Jacob Martin AKA Jacob Chase, have been known to engage with groups like Direct Action Everywhere (DXE), Anonymous for the Voiceless, and Mercy Line Transport among others. These groups might be doing some really good work for animals but we ask with compassion to those working with or within these groups- where do you draw the line with people that you work with to save animal lives? Are you okay with your Jewish, black, brown, trans and queer comrades working with somebody that considers them subhuman? Just because you have a few solid ideals doesn’t negate all the other problematic ideas you believe. A broken clock is only correct twice a day. We certainly wouldn’t attend Hitler’s potluck just because it was vegan. 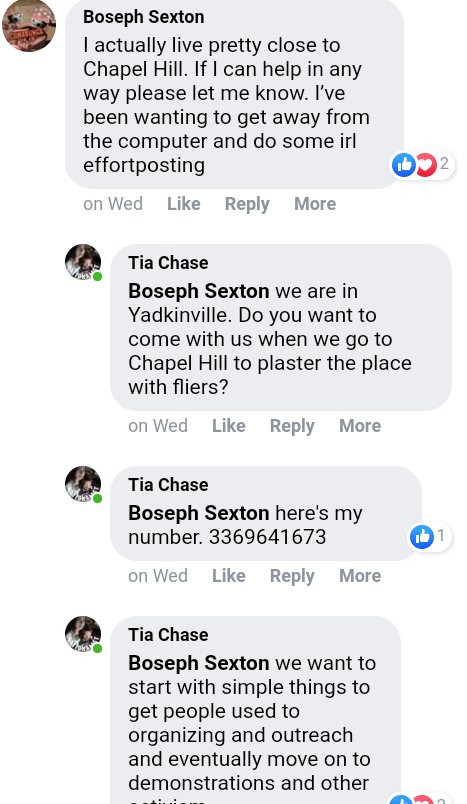 Tia operated several facebook accounts that have all been removed or deplatformed by the time this is being published. However several anti-racist researchers were able to archive quite a bit of information before Foster went dark on the main web. This includes an extensive friends list of neo-nazis, “likes” of neo-nazi and transphobic facebook groups, as well of loads of bigoted comments. 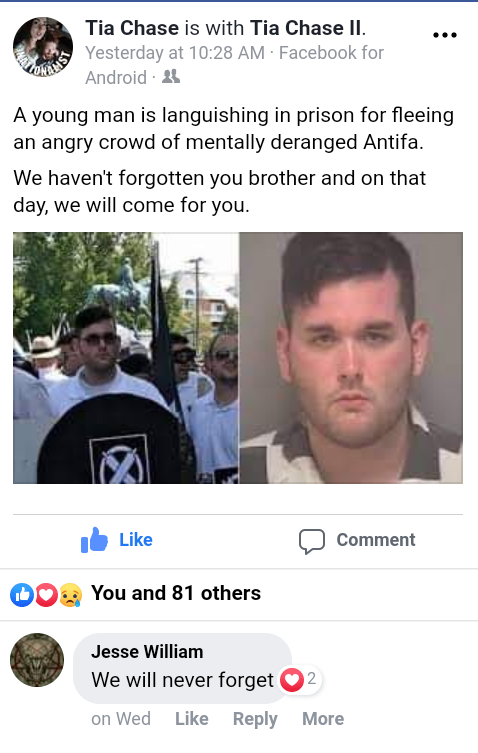 Tia and Jacob are hiding their true intentions and using animal liberation to do so. Let’s take a look at the company she keeps when not advocating for animals. A video uploaded to youtube on February 17th, 2014 by “bekindtoanimals100” shows Tia and her friend complaining about being asked to leave a headshop in Virginia for not following the common rule of abstaining from saying the word “bong”. You might recognize the man in the video as Alex McNabb, the neo-nazi podcaster who was fired from his job as an EMT after he was exposed as a neo-nazi podcaster on “The Daily Shoah”, and saying, among other things, that he had tortured a black child with an oversized needle.  McNabb was also a participant at the deadly Charlottesville “Unite the Right” rally. Not only does Tia hang out with internet nazis, she has been hanging out with them in real life for quite some time. This is not a new trend for her and if you are surprised by all this information, know that you are not the only one. 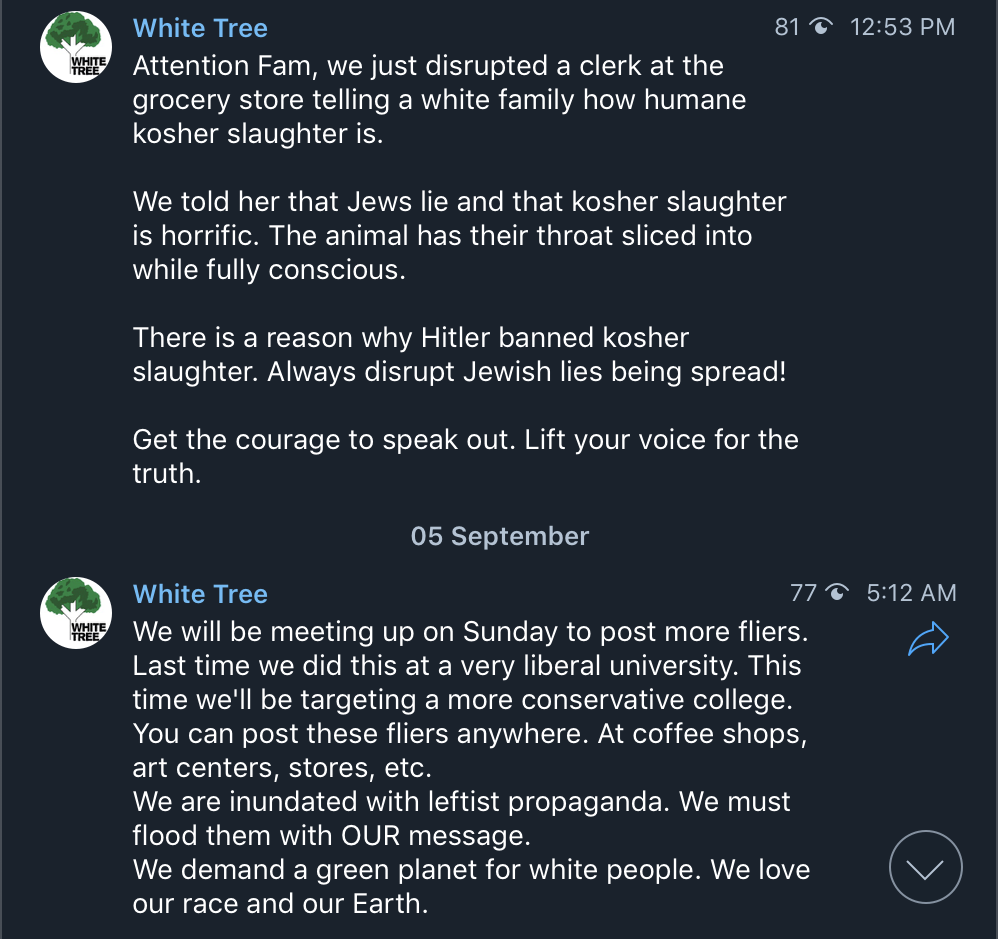 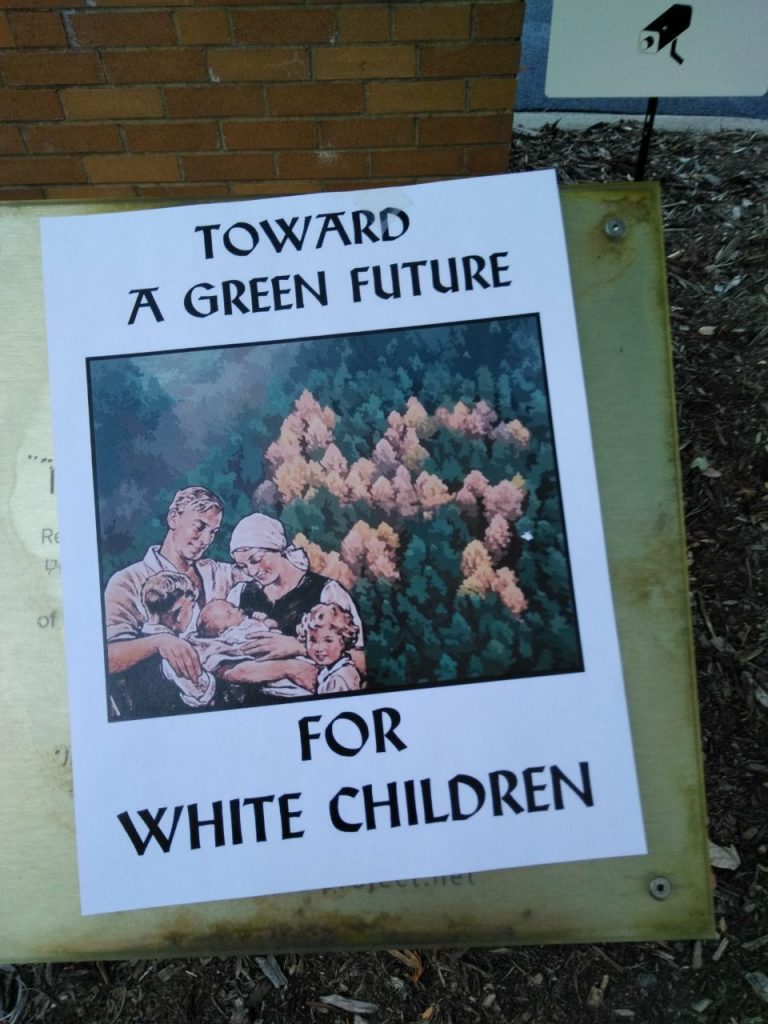 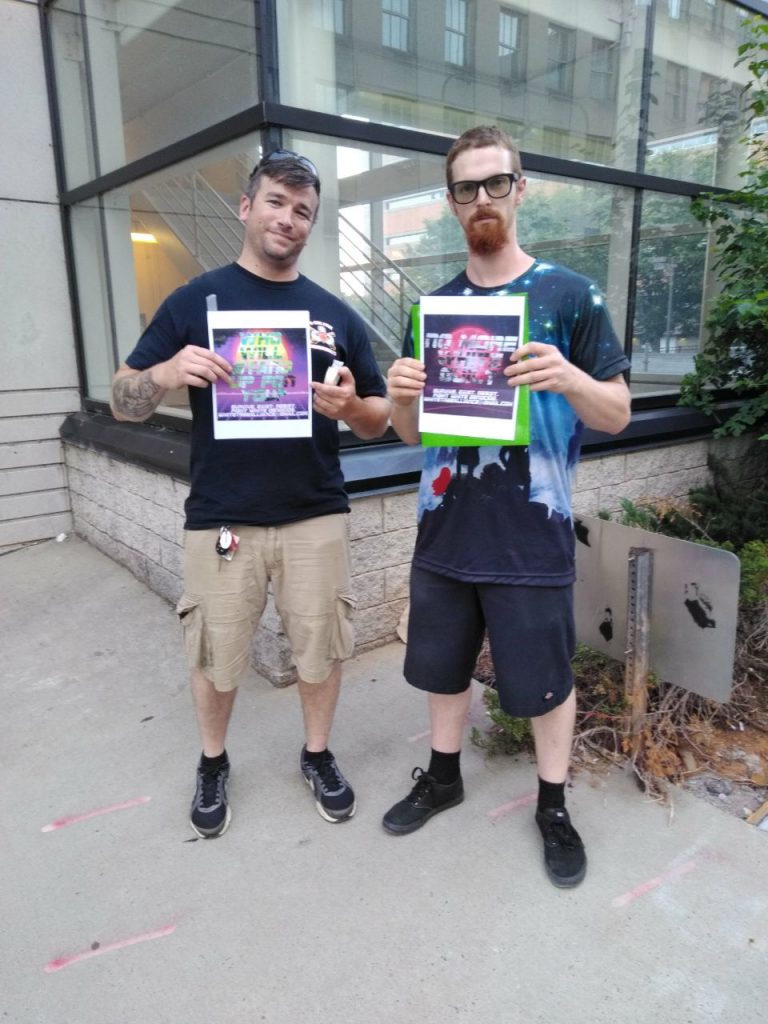