Back in March, white supremacist and overt Neo-Nazi circles began to circulate event flyers for “White Lives Matter” marches to take place on April 11th in cities and towns around the country. While it was billed as a “grassroots” movement of “normal white people standing up for what is right”, a look behind the scenes via Corvallis Against Fascism’s leak of the event organizer’s admin chat logs show a different story. The march leaders for many different cities’ events openly use swastikas on their profiles, logos for groups like the National Socialist Order (an Atomwaffen reiteration/splinter group) and the American National socialist Party, and have usernames like Raleigh, NC rally organizer “ϟϟRide_The_Bolts ϟϟ”, and Orange County organizer “Your Fuhrer”.
What antifascist infiltrators also found in the Telegram organizing chats was that among identified members of Neo-Nazi organizations like National Socialist Club and New Jersey European Heritage Association, the highest common membership factor for any organization was in fact with the Proud Boys.
The biggest story regarding the White Lives Matter rallies that were scheduled on the weekend of April 11th was the success of antifascists in infiltrating their chats and wreaking havoc on their ability to organize successfully. The weekend saw remarkably low turnout all around the country. Asheville saw one lone racist who was quickly identified as Lucas McCain Hall of Fairview, NC, before being chased off (he eventually snuck back around town and waved a flag briefly again while being heckled, later on).
In Raleigh, NC the nazis never showed up, due in large part to infighting and disruption in the lead up to the event. And yet, antiracists in Raleigh still came together that day to hold their own victory rally and march through the city.
Despite their epic failure, Neo-Nazis and white supremacists began attempts at organizing shortly after for another set of coordinated White Lives Matter rallies across the country, this time scheduled for 9am on May 8th. Here’s where we meet the subject of our article and sole organizer of the White Lives Matter rally in N.C. for May 8th, Joseph Boswell Gartrell IV. When organizing for the May WLM events began, a new Telegram channel was quickly made. Those interested in organizing the events for their states/areas volunteered to do so and were given Administrator access to their own Telegram channels and chats for their respective WLM events. By this point, the previous N.C. event organizer,  “ϟϟRide_The_Bolts ϟϟ”,  had been dubbed a “fed” by current WLM organizers. In his place steps user “Joe WhiteShark” or @jreb93 to take the reigns of organizing the next White Lives Matter rally in North Carolina.
JOSEPH “JOE” BOSWELL GARTRELL IV 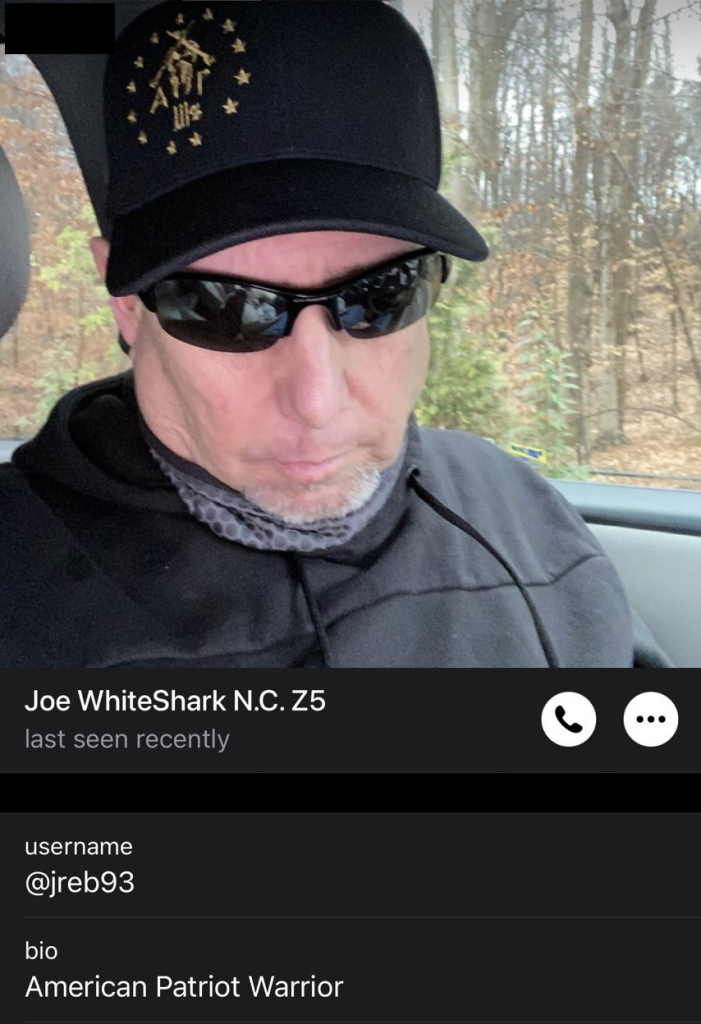 Profile Archive Links: Gab, Parler, LinkedIn, Twitter
—————————————————————————————–
It was fairly quick and easy to link “Joe” to his Parler and Gab accounts (linked above), which both used the same display name of “Joe WhiteShark”, and a slight variation of his username @jreb93 on Telegram- to @joereb93 on Parler. It’s immediately noted that Joe represents himself as an American Patriot Three Percenter, and ‘soft’ represents the Proud Boys through common signifiers like calling himself a “Western Chauvinist” and “F.A.F.O” (Fuck Around and Find Out).
Let’s talk about the history of the Three Percenters movement, of which the group American Patriot Three Percenters is one of many splinters. The Three Percenter Movement was founded by Michael Brian Vanderboegh in 2008 amid a reactionary rise of nationalist fervor, along with white supremacist and conservative political organizing in the face of Barack Obama’s election as the first black president of the United States. Other reactionary movement examples of this time are the Tea Party Movement and the beginnings of the Alt-Right Movement. Vanderboegh had a long history of anti-immigrant, homophobic, anti-government, militia movement organizing and activity. From his authoring of “Strategy and Tactics for a Militia Civil War”, to participation in militia “patrols” along the US-Mexico border, and his unpublished novel Absolved – which was cited as the inspiration for a 2011 plot by Georgia militia members to go on a multi-city bio-terrorism rampage with ricin.
The III% movement has been rife with internal upheaval, drama, and fracturing in many directions over the past few years. While the movement is outwardly anti-government overreach, it has always carried heavy undercurrents via it’s activities of chapters and members of a anti-immigrant, homophobic, and white supremacist nature.  For example, in August, the Arkansas American Patriots III% and other militia members showed up at a march against racism and in northern Arkansas to block the protesters’ access to a Ku Klux Klan compound by request of the KKK to ‘provide security.’ There are myriad examples, from Unite the Right in Charlottesville to 2020’s Stone Mountain rally, of III%er formations openly organizing and participating in racist events- despite what many chapters have said on the heels of bad press for their involvement in these events.

Now, Joe WhiteShark’s profile’s also provide an example of what he’s about by the content he chooses to share there. Going back just a week there are two posts that stick out as prime examples of his beliefs and intentions. The first is a post sharing the White Lives Matter rally flyer for NC. The second is of a video, the preview snapshot of which including the “black sun” or sonnenrad. This is a Nazi symbol widely used by many Neo-Nazi and fascist groups and individuals, including the Christchurch, NZ murderer Brenton Tarrant who murdered 51 people in a horrific fascist attack on worshipers at two mosques. If there was any question about the level of belief and intention of Joseph Boswell Gartrell IV, it’s long gone. 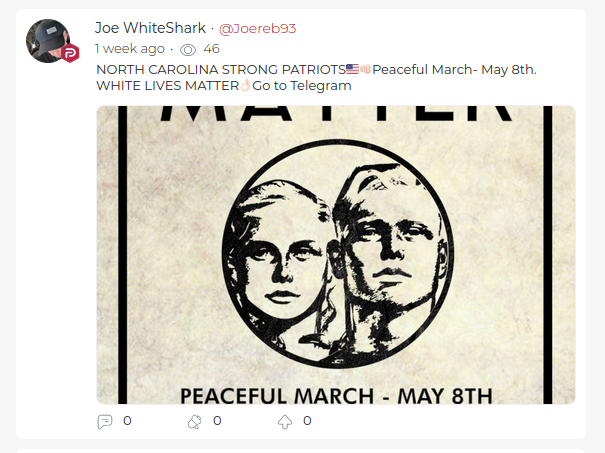 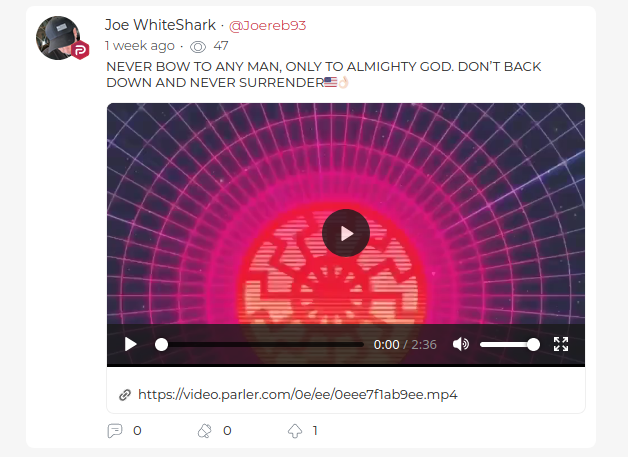 Much like last month’s planning for WLM rallies, antifascist researchers again infiltrated the admin chats for the second round attempt and leaked them ahead of time. While these chats weren’t incredibly active, “Joe Whiteshark” did give us another clue toward confirming his identity. In conversation with the Florida WLM rally organizer “Cracker”, Joe suggests he “March down OBT” and that he “just moved” from an area called Hunters Creek before the Covid-19 lockdowns last year. These are references to the Orlando area, with OBT referring to the strip Orange Blossom Trail, and Hunters Creek being a south Orlando neighborhood.
Aside from his own words in the chat logs and these racist social media profiles of “Joe WhiteShark’s”, there is also an old Twitter account of his that recycles the username @jreb93.  Between all of the accounts, Joe gives a particularly detailed ‘About’ description, which is ultimately helpful in verifying his identity as Joseph Boswell Gartrell IV. Such details, including the Orlando reference, sum up to:
– a Navy UDT (Underwater Demolition Team) veteran, serving sometime between 1980-1988.
-His dad was a WWII Navy veteran and SBD (Scout Bomber Douglas) dive bomber.
– Being born and raised in South Miami, Florida, and an avid Miami Hurricanes fan to which his dad is an alumnus.
– Recently moving to North Carolina some time before April of 2020, and living in Orlando, FL before that. 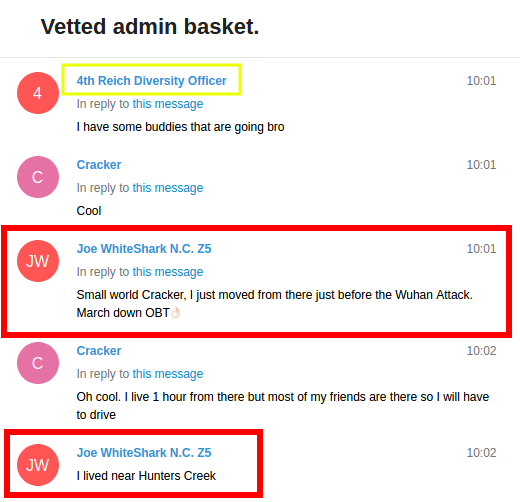 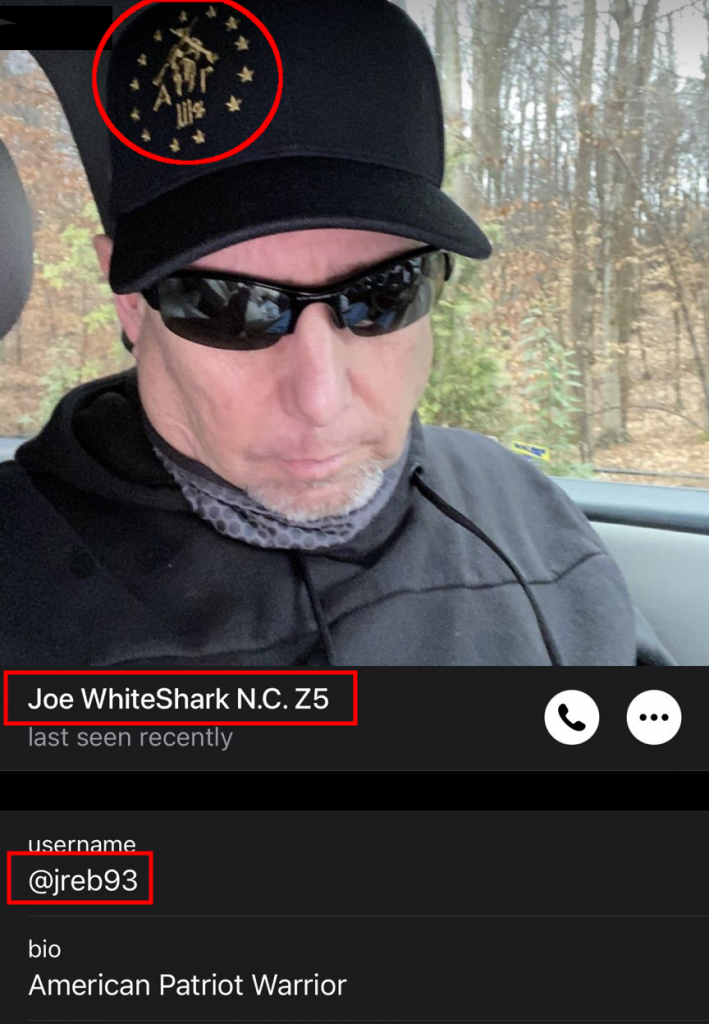 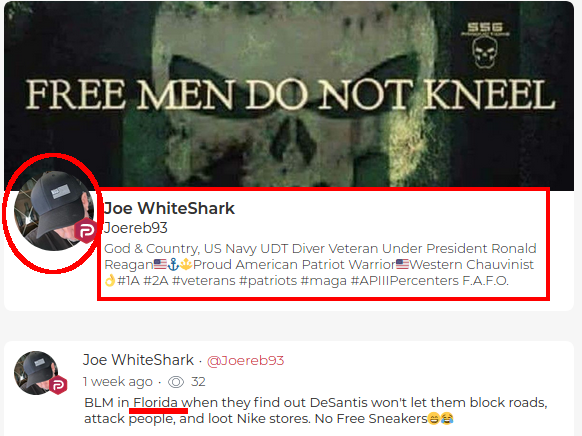 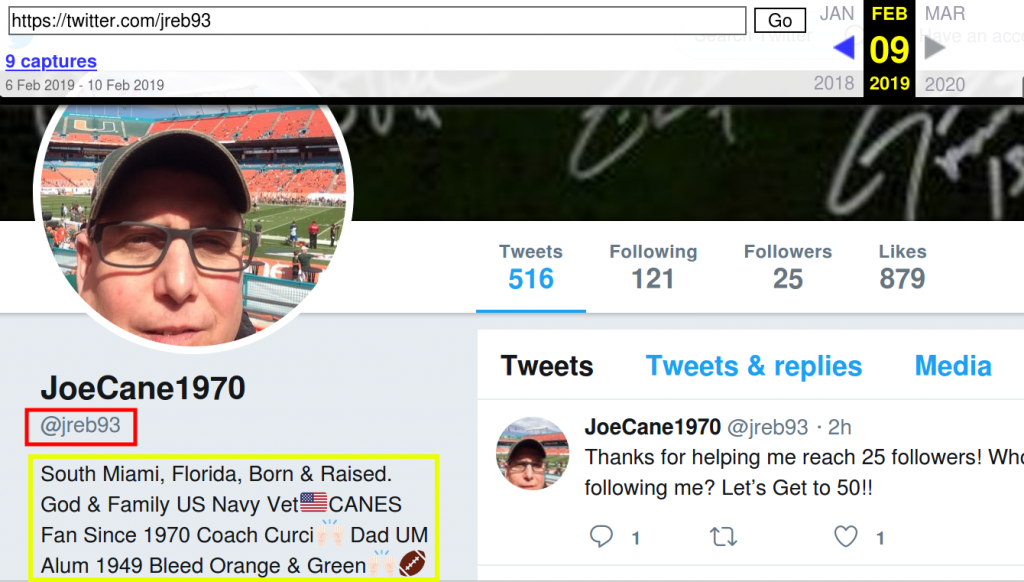 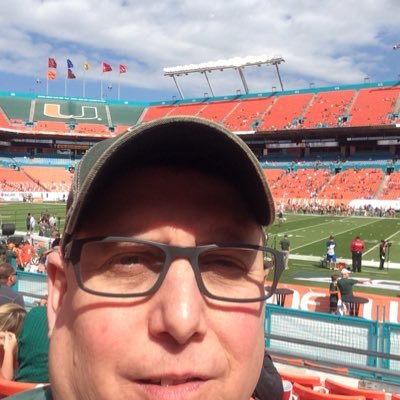 A bit more diligent research utilizing the clues “Joe Whiteshark” left us throughout the internet turns up Joseph Gartrell’s old LinkedIn page.  Here we get confirmation of him growing up in South Miami, being a Navy UDT diver in the early/mid 1980’s, and recently living and working in the Orlando area before moving to North Carolina. As icing on the cake, we were even able to find record of his father Joseph Boswell Gartrell Jr’s Navy training memorial post confirming his SBD dive bomber experience during WWII.
There are few and far between images of Joseph Boswell Gartrell IV on the internet, unfortunately. The few we’ve included also span a 20 year period with large gaps in time between. Please feel free to send us any tips and information regarding Joe Boswell via email. What we do know is Joe is living and operating in the Winston Salem area of North Carolina and an active white supremacist organizer who is a danger to our communities. Don’t give him an inch! 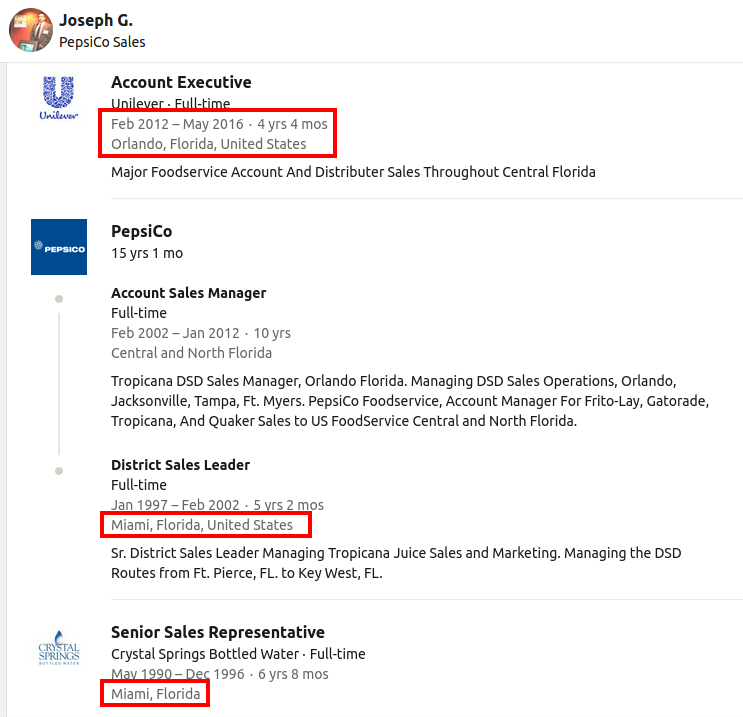 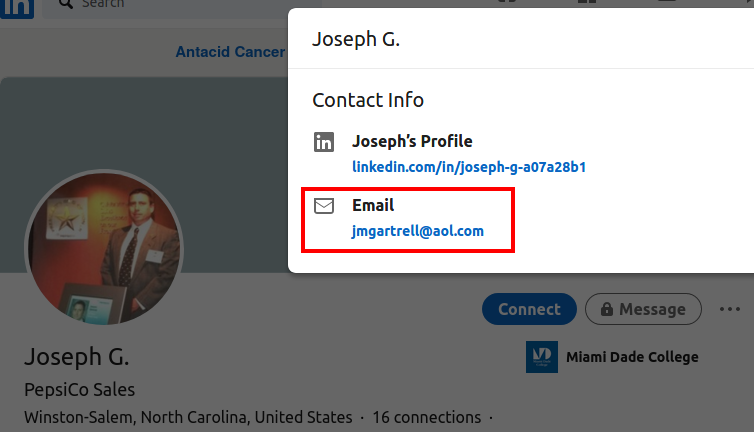 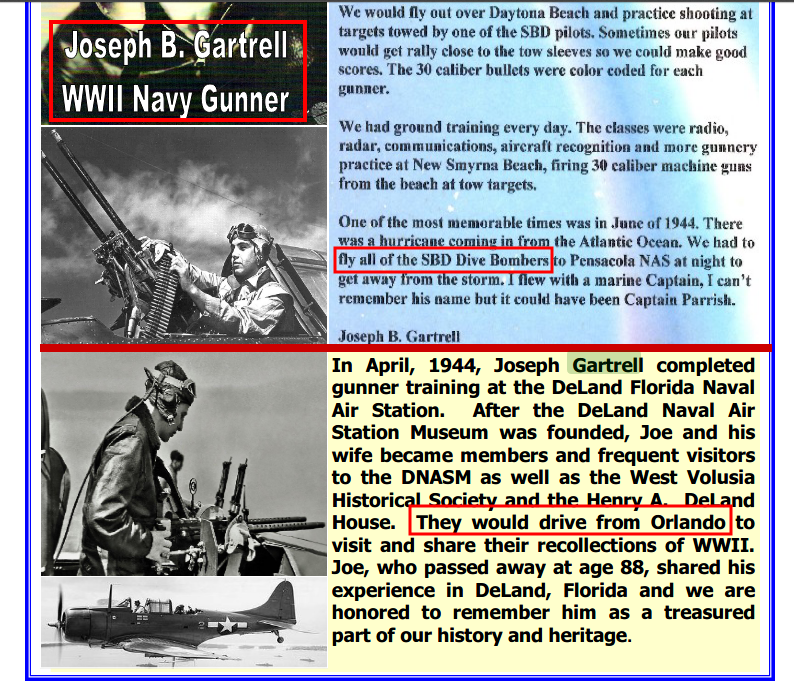