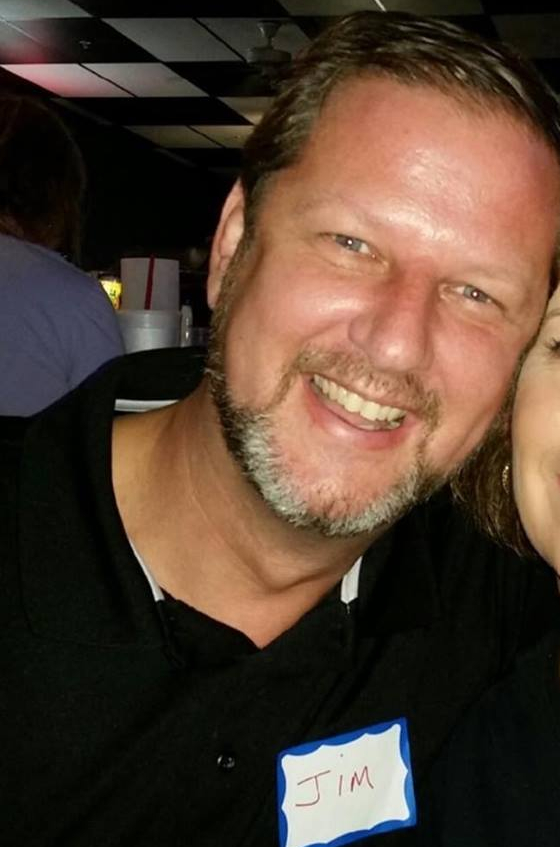 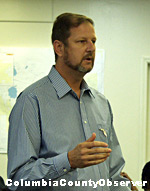 James Patrick Shillinglaw is a long-time white supremacist in the south, attending various rallies over the years that are mostly tied to confederate monuments. Shillinglaw has resided in Florida, Virginia, South Carolina, and North Carolina, with the majority of his recent years living in the Jacksonville, FL area and working as a “historian” at the Southern History Museum. It is unlikely he still works there officially, though it is likely he remains on their Board of Directors. He can be seen as early as August 2015 in the public sphere, when he was escorted out of a Lake City, FL council meeting to retire the city seal including the confederate flag, while chanting “Southern lives matter, southern lives matter”. James Shillinglaw is also notable on the Appointed Staff list for the Florida Division of the Sons of Confederate Veterans. 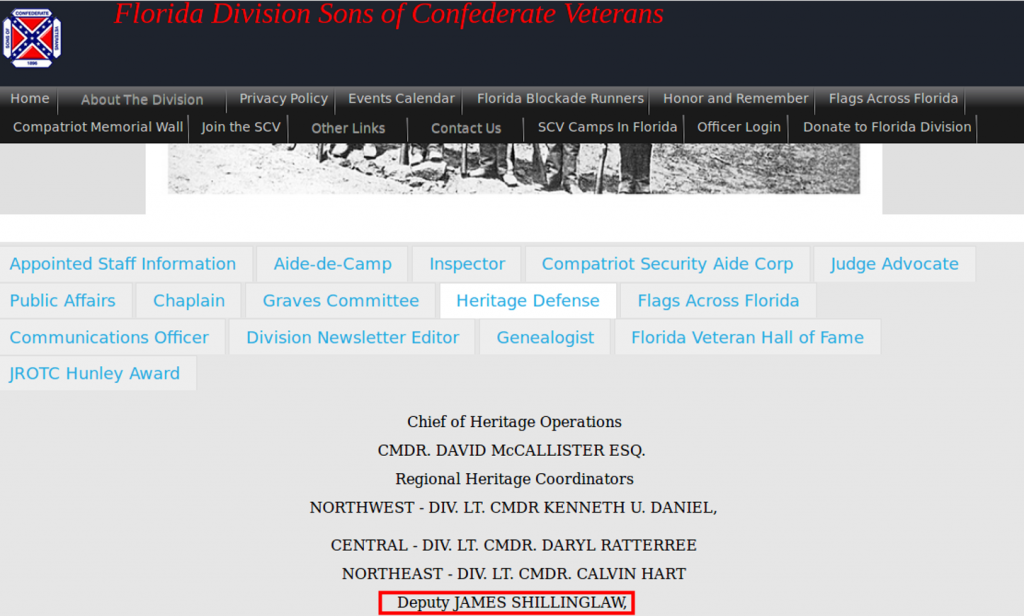 Rallies across the southern US in support of the southern confederacy and its relics have long been a bastion of racially-based intimidation and hate, and displays of white supremacy- all thinly veiled (if veiled at all) as “southern heritage”. While there are many in the south who have little to no opinion about the Confederate flag or any of the 100s of monuments coming down, the unseen reality is the rallies around them have been used as networking opportunities for white supremacist, white nationalist, and fascist groups for decades. The Ku Klux Klan uses the confederate flag as its imagery, the League of the South (LOS) uses a variation as its imagery, Identity Dixie (ID) uses a variation of its imagery, the list goes on.

The vast majority of Shillinglaw’s interest and activity in white supremacist movements is tied to the failed southern confederacy and confederate monuments. Confederate monuments are also part of a documented historical legacy known as The Lost Cause of the Confederacy, or the Cult of the Lost Cause. This refers to an ideology of pseudo-history based on negation, that supposes the American Civil War was not centrally based on slavery, and repaints the Confederacy as ‘just, equitable and heroic’ instead.  If you look at the history of confederate monuments being built around the US, there are waves of new installations post-WWI and again in the 1950’s and 1960’s. This is because just after WWI the last of the shamed confederate veterans were dying, and groups like Heirs to the Confederacy or United Daughters of the Confederacy had statues commissioned and dedicated as a way to subvert their legacy of white supremacy and put a heroic, selfless, idealized spin on it, denying any immorality. The second wave occurred in the 50’s and 60’s as (you guessed it) a reactionary antagonism of the Civil Rights movement.

Before we get into Shillinglaw’s specific ties to white supremacist organizations and actions, we’d like to share another aspect of his history of violence. In November 2013, James Patrick Shillinglaw was arrested and held before being bonded out for felony aggravated child abuse (827.03(1)(A)) in Jacksonville, FL.  The details of his actions are abhorrent, and include beating and choking the victim for interrupting him on the phone. The specific statute he was charged with reads as follows:

827.03 Abuse, aggravated abuse, and neglect of a child; penalties.—

(1) DEFINITIONS.—As used in this section, the term:

(a) “Aggravated child abuse” occurs when a person:

1. Commits aggravated battery on a child;
2. Willfully tortures, maliciously punishes, or willfully and unlawfully cages a child; or
3. Knowingly or willfully abuses a child and in so doing causes great bodily harm, permanent disability, or permanent disfigurement to the child. By the time two years had passed, James Patrick Shillinglaw exponentially stepped up the outward nature of his hatred and violence with an attendance to the deadly Unite the Right (UTR) rally in Charlottesville, VA in 2017 as an open member of League of the South (LOS). Shillinglaw is on video and in photos from both the August 11th torch march and August 12th rally wearing an LOS hat, LOS T-shirt, and holding an LOS flag. League of the South is a neo-confederate, white nationalist, and white supremacist organization co-founded by anti-semite, pro-slavery, slug Michael Hill in 1994. The group was part of the Neo-Nazi Nationalist Front alongside the National Socialist Movement (NSM), the now laughably defunct Traditionalist Workers Party (TWP), and Vanguard America (VA) since splintered and rebranded as Patriot Front (PF). They participated in the Pikeville, KY rally in April 2017, Charlottesville UTR rally and torch march, and the White Lives Matter rally in Shelbyville, TN as key organizers in all three events (and many more). 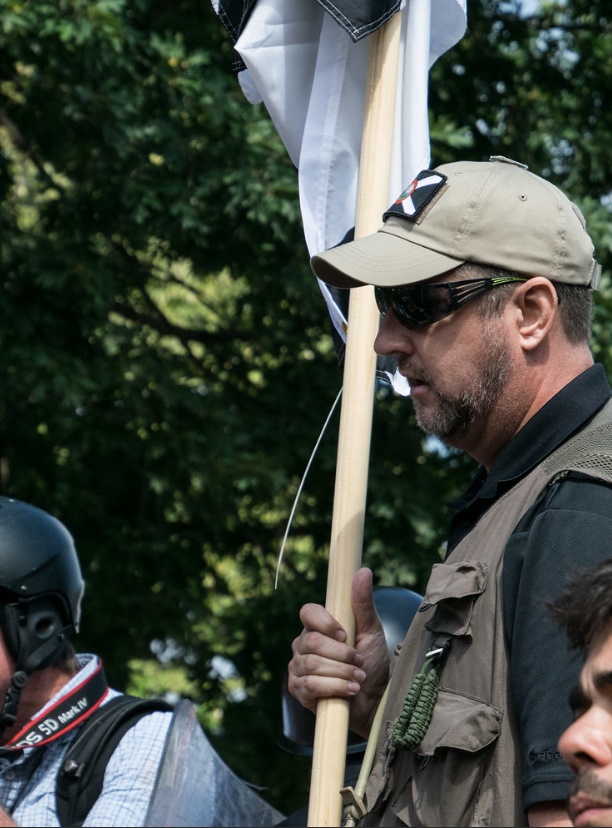 As pointed out on Twitter by users @EmilyGorcenski @TTOJAF and @m1523751, James Shillinglaw is documented in LOS group pictures, marching with the League of the South into Charlottesville on August 12th, and taking part in the torch march on the night of August 11th. In particular, the League of the South march into Charlottesville on August 12th is cited as one of the more violent melee attacks of the day, where anyone in their way was met with attack. This included James Patrick Shillinglaw, as he is seen on video assaulting someone with his flagpole here at the 0:35 mark. 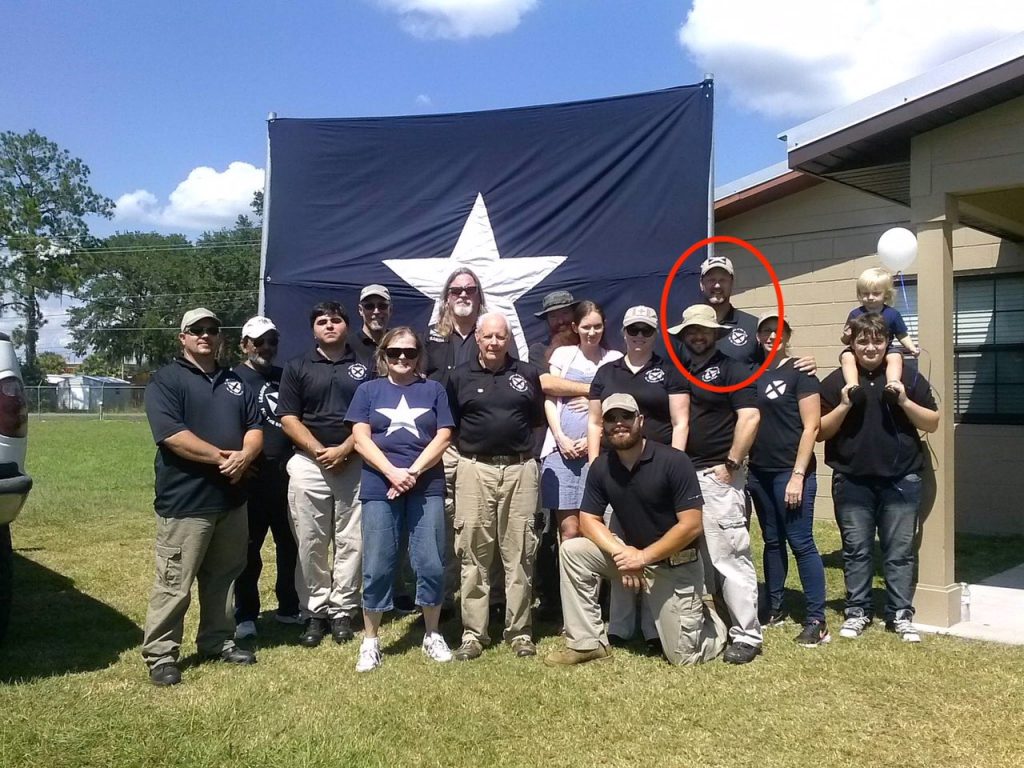 Not only is James Shillinglaw a League of the South member, Unite The Right rally attendee and convicted child abuser, he is now being exposed as a member of American Identity Movement (AmIM), formerly known as Identity Evropa (IE).  In the Discord chat logs for the White Nationalist group formerly known as Identity Evropa, which were leaked earlier this year by Unicorn Riot, James Shillinglaw operated under the username “Peter Long”. Profession: Last known job was as Chief Historian at the Museum of Southern History in Jacksonville, FL. Also retired US Navy.

James Patrick Shillinglaw’s personal Facebook and Twitter pages draw a clear line between his recycled usernames, including that of ‘Peter Long’ which he used in Discord. He then goes on to use his other usernames as the actual handles/URLs for these not-so-anonymous accounts, tying himself from one account with pictures of himself to one without a legal name and filled with awful hate and bigotry. 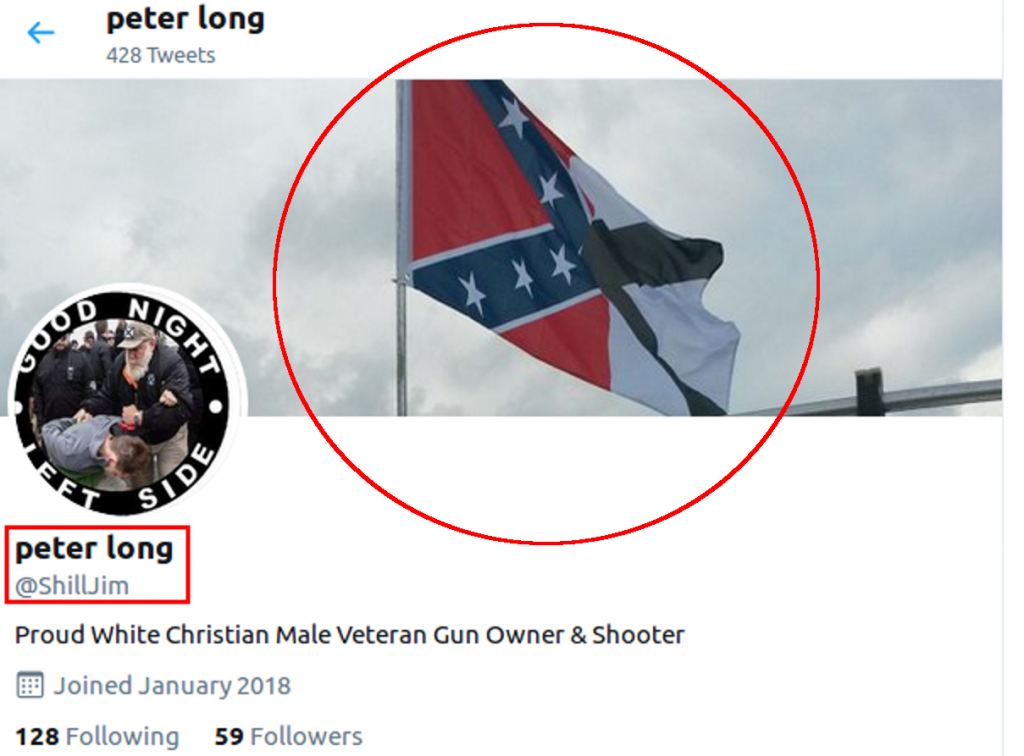 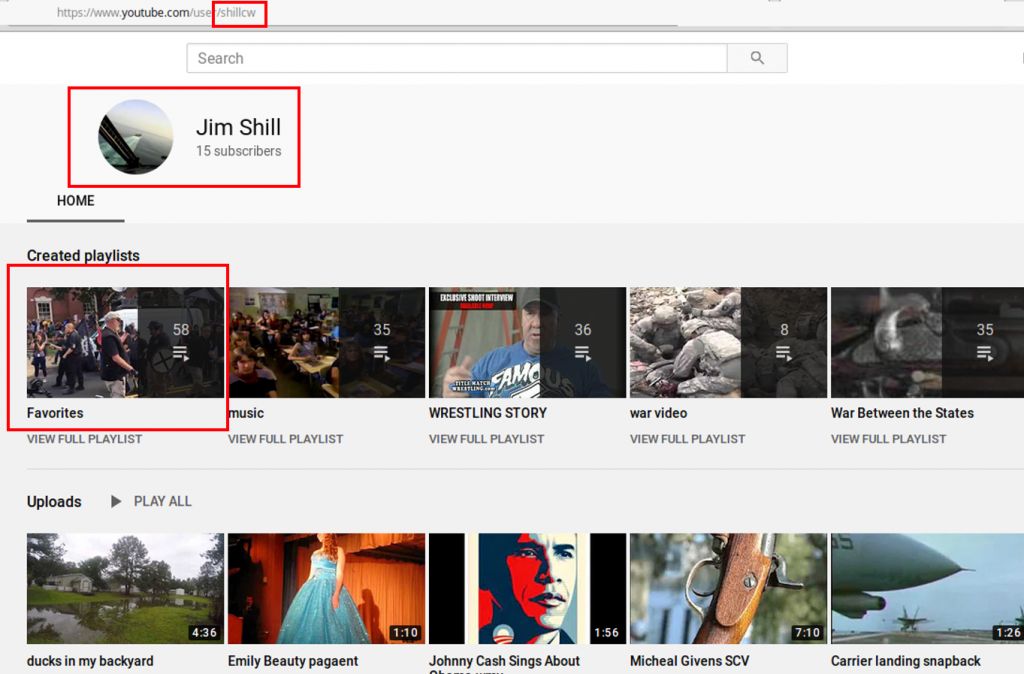 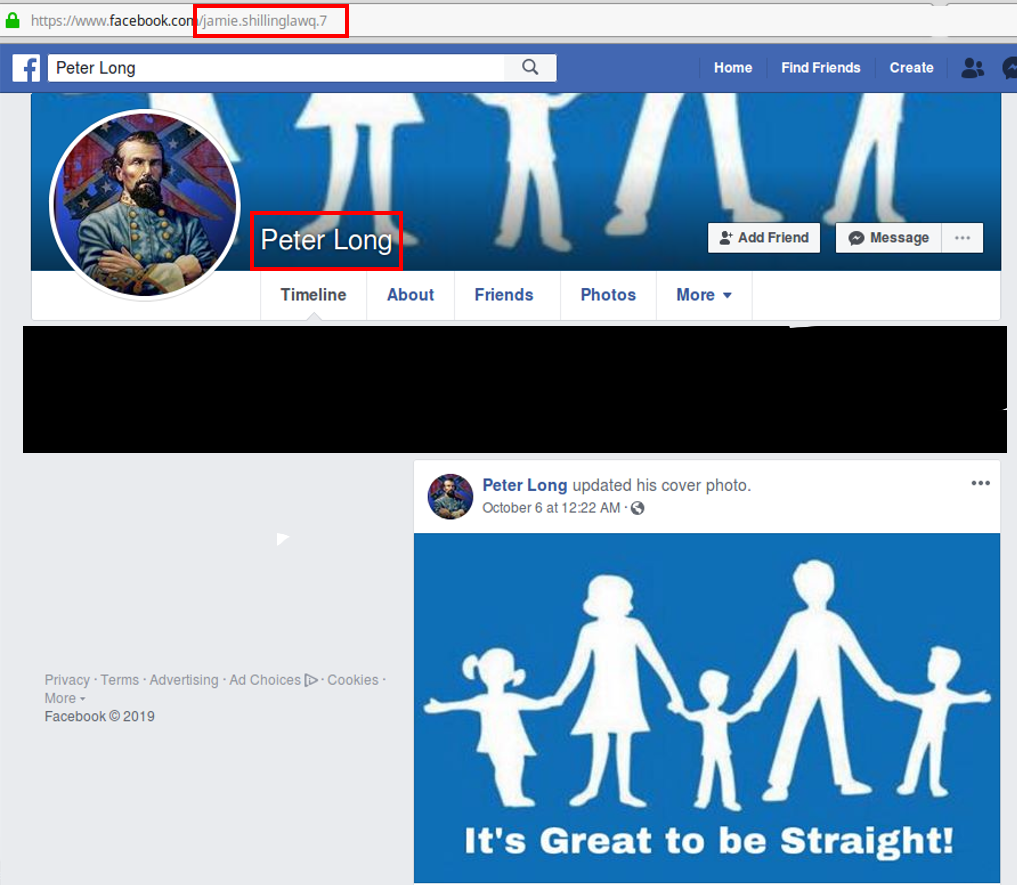 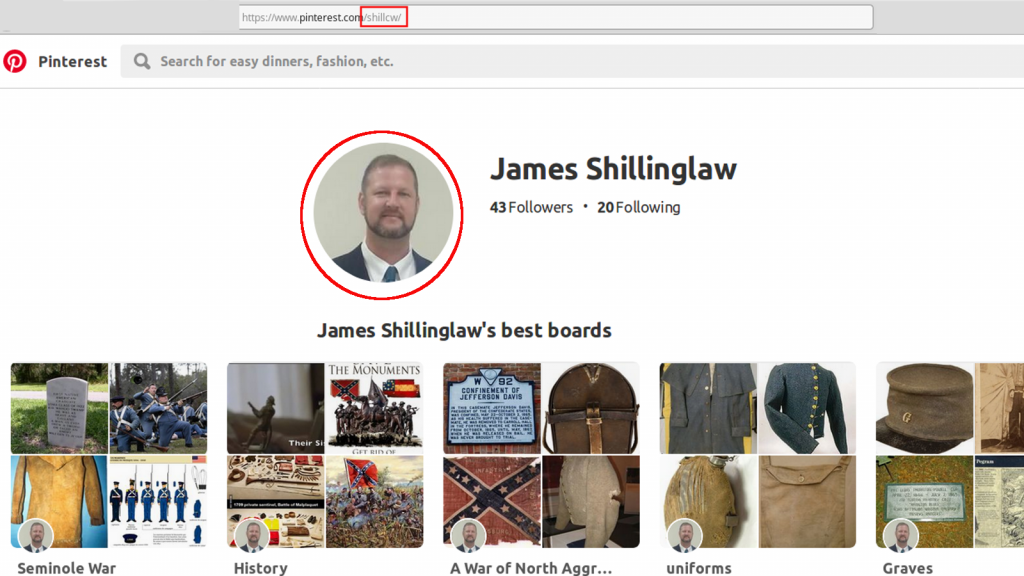 Within the discord chat itself ‘Peter Long’ doesn’t post too much, but he does let us know that at the time of joining the hate group he lives in Florida. By the time of his last message before the publishing of the leaked chat, he has moved to North Carolina and is actively trying to rally people to (you guessed it) a confederate monument rally in Raleigh, NC. It is worth noting that within the past year, James Patrick Shillinglaw has remained very active in attending confederate rallies throughout his new home state of North Carolina, including as recently as the October rally in Pittsboro, NC. 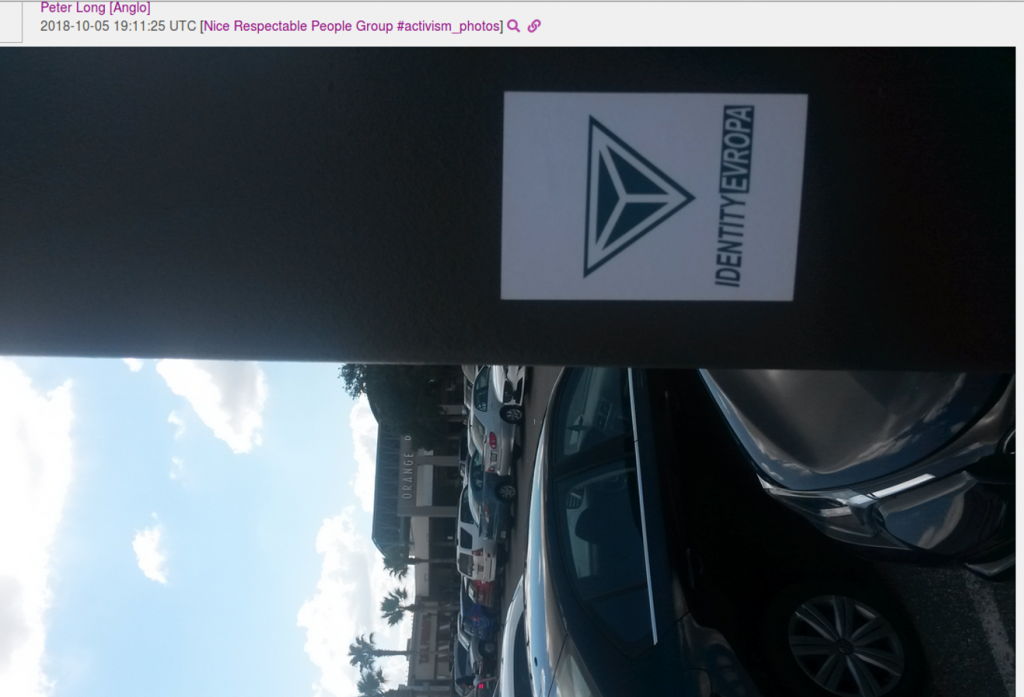 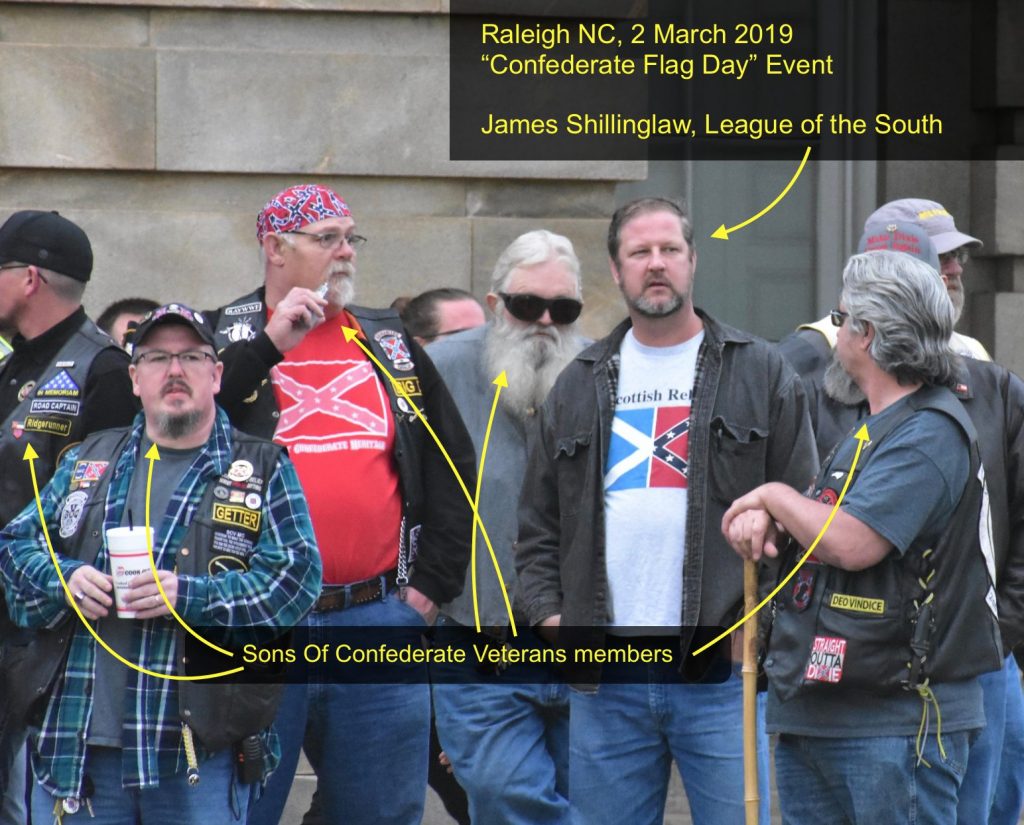 In the few posts as Peter Long in discord, Shillinglaw shows us he is actively participating by throwing up an Identity Evropa sticker, and shares his preferred white supremacist twitter handle ‘AngrySaxon14’. This is of course a reference to the 14 words, the white nationalist slogan coined by virulent racist David Lane. On discord, Shillinglaw also incessantly asks how the hate group is doing.  And ya know, why not mutually follow yourself from your personal account and your even fashier account? And your wife’s racist account? Can’t see how that will go wrong. 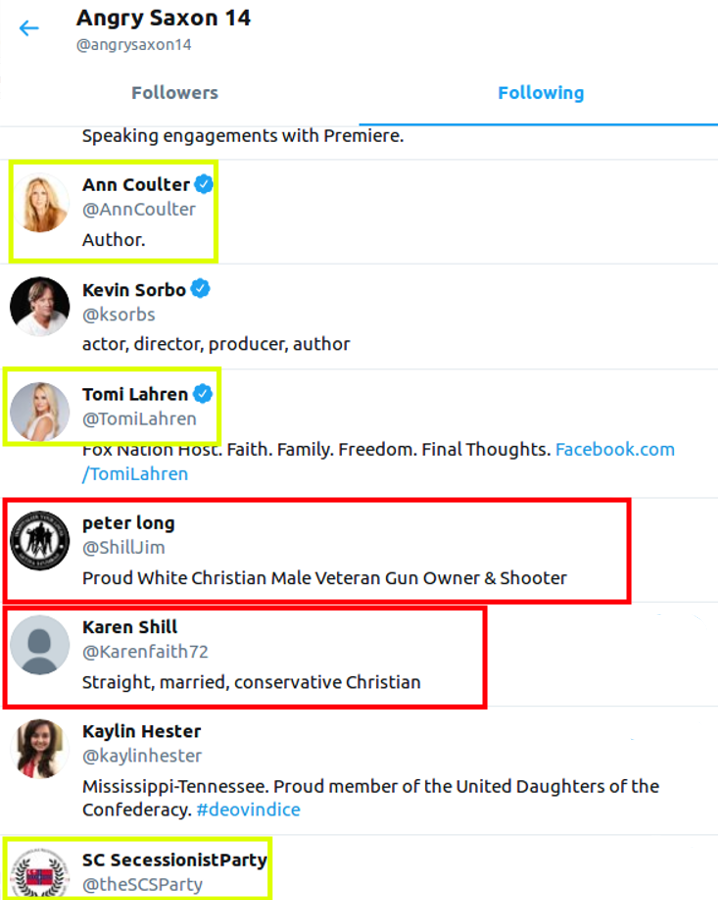 From his Facebook to both of his Twitters, the likes and followers are a litany of white nationalist, racist, and fascist, pages and personas. The same can be said of his wife Karen Faith Scott Shillinglaw, who is not a known member of any organization but needs to be held accountable for her views as well. Below are just a couple of the many, many… many examples. Such examples will include 4 different ‘White Lives Matter’ pages, ‘White and Proud’, and 2 different Pioneer Little Europe pages. Pioneer Little Europe is a failed white nationalist project aimed at creating whites-only communities across the United States, most notably in Leith, North Dakota. 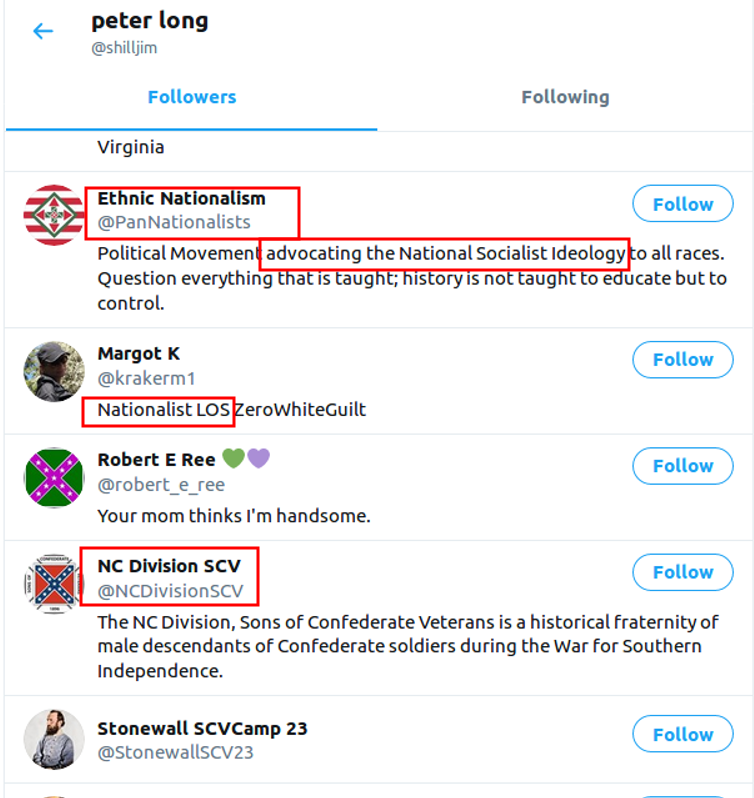 James and Karen Shillinglaw also used to share Karen’s Facebook page, before she recently reverted back to her own. Even functioning as a couple’s Facebook page, they had white nationalist support for their photos like League of the South leader Michael Hill. It seems they’ve only been married for a couple years and their connection linked to their support of the southern confederacy. Karen and James are pictured one after another speaking in defense of the confederate flag on the Lake City, FL logo previously mentioned, before James was escorted out. 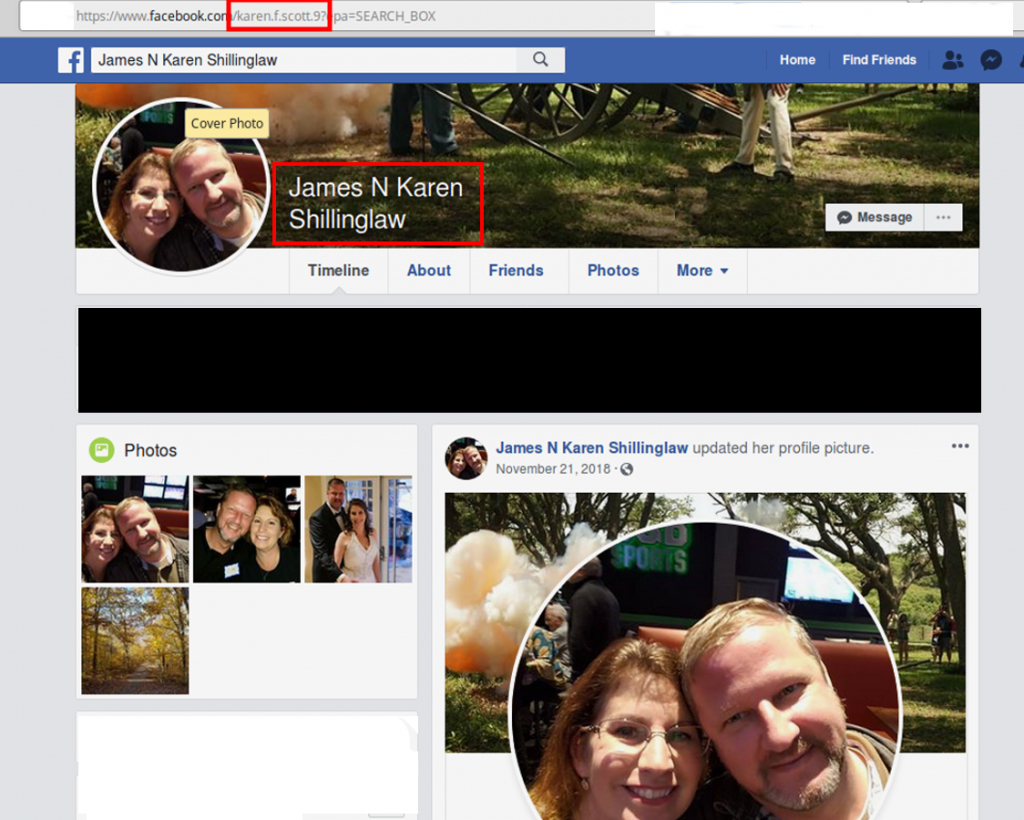 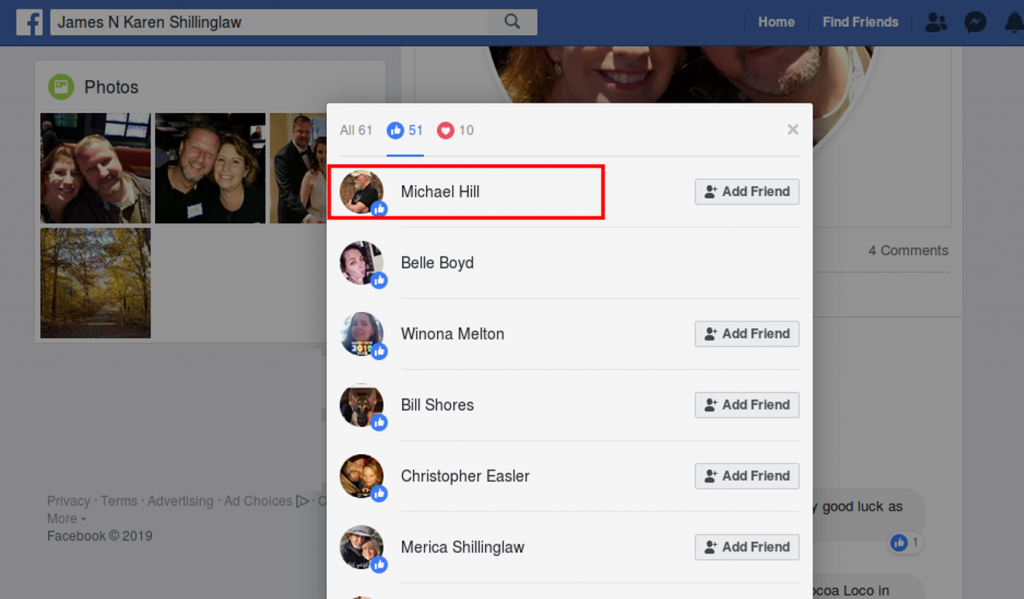 In summation, James Patrick Shillinglaw is an incredibly racist, violent, active dues paying member of both white nationalist orgnaizations American Identity Movement and League of the South, and is also a known child abuser. He continues to show up for confederate rallies across the region, known recruiting grounds for exactly the same kinds of organizations he actively participates in. James Shillinglaw is a disgusting excuse for a human being and should be shown no mercy for the atrocious actions he’s taken and continues to support. Don’t give him an inch.